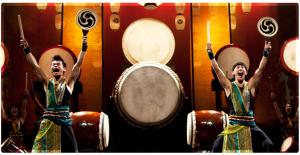 Pac.mercyhurst.edu photo: Yamato is a Japanese drumming group known for its high-energy and dazzling large scale performances.As soon as this show starts, you can feel the music resonating through your body.

On Sunday, Nov. 6, Yamato: The Drummers of Japan came to the Mary D’Angelo Performing Arts Center (PAC). They performed two shows that day—at 2 and 6 p.m.

“This is the 10th year Yamato has come to the PAC,” said PAC director Michael Fuhrman. “Every year they sell out. We could have three shows here, and they’d still sell out.”

The group did not disappoint Erie audiences this year.

Their new program “Gamushara: The Beat of Courage” is fun and has a high-energy level. The group works so well together that you can feel their relationship from the audience.

The members of Yamato consider this to be their way of life. Reading their biographies, it is clear that they all feel the drumming in their soul. You can’t deny that fact when you see them on stage.

Yamato performs on traditional Japanese “taiko” drums. Some of the drums were very small and made a light, piercing sound, while there were some drums that were as big as the performers themselves. These drums made a huge thundering boom when they were hit.

The stage was very simple, but interesting. The focus was always on the drums and the drummers themselves. The way the drummers would work their way into formations for each piece was extremely graceful and athletic.

Fuhrman commented on the athleticism of the group when he gave his opening speech to the audience.

“Their sheer athleticism is amazing. If you came last year, you won’t be disappointed. They put on a new show each time,” he said.

The large-scale pieces were truly marvelous. The way the entire company worked together to create rhythm, harmony and melody was amazing. After every number, the audience burst into applause.

In between the large numbers, there were small numbers of just a few of the group members. They would play on different instruments, sometimes drums and sometimes hand cymbals, and would highlight the group’s comedic side.

Even though Yamato is known for its high-energy, dazzling large scale drumming, it was the small pieces that really let the audience get to know who they are.

Mercyhurst College is incredibly lucky that an international success such as Yamato continues to return to the PAC year after year. This is a group that everyone should see.