Women’s soccer takes on the playoffs 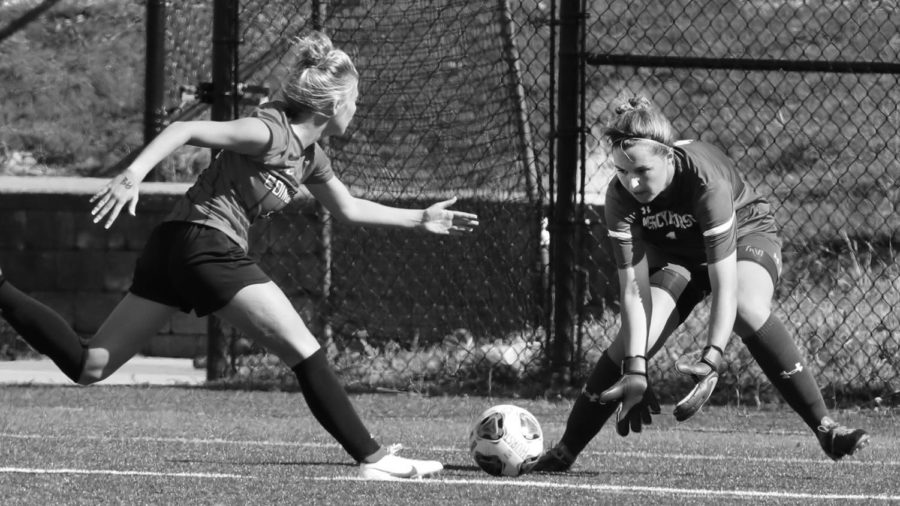 The Women’s soccer team was back in action on Nov. 9 when they played in their first PSAC playoff game. The Lakers hosted the Edinboro Fighting Scots for the first round of the playoffs.

Going into the game, the Lakers were on a six game winning streak. The result of this game once again kept the streak alive and it will now be a seven game streak. The final score was 2-0, with Mercyhurst scoring both goals and Edinboro ending the game with no points.

Mercyhurst got their first goal during the 17th minute of the game. Junior midfielder Amber Thomas kicked a penalty shot that allowed the ball to sneak past the goalie and into the back of the net. This goal gave the Lakers the first point of the game, and also gave them the confidence they needed to score again.

“I was excited but knew we had to keep working to get another goal,” Thomas said in response to the penalty shot.

The Lakers ended the first half of the game outshooting the Fighting Scots 13-1. The second goal was scored in the second half of the game by freshman forward Karah Van Horn. Van Horn’s goal was assisted by sophomore forward Emily Mijares. This goal added another point on the board for the Lakers making the final score for the Lakers 2-0. This is what Thomas had to say about the win against Edinboro,

“It felt great to get that first win under our belt and to advance as a program but we know we need to keep working to improve to achieve our overall goals.” Because of the win against Edinboro, the Lakers would be advancing to the PSAC semi-finals.

“I am proud of how we played. We really came together especially at the end to keep winning out and secure our first place spot going into playoffs,“ Thomas said. “We had a rough start to the season but we didn’t let that stop us from reaching our goals as a team.”

“Moving forward we will just keep working hard and taking it day by day,” said Thomas.

The final score of the game was 0-2. Before this game, the Lakers have faced the Huskies 19 times. The last time these two teams battled was in 2018, in which the score resulted in a 0-0 tie. Overall, over this past season the Lady Lakers are 7-2-1 on road games. However, despite the semi-finals loss, Mijares and sophomore goalkeeper Maddie Elbro are being awarded for their accomplishments over this past season.

Mijares was named PSAC West Rookie of the Year along with Athlete of the Year. She ended the regular season tied for the most goals, which was 13, and also ended the season with 40 shots on goal. Elbro was named PSAC West Defensive Player of the Year. Elbro played every minute of every game this season and recorded a Western Division-best ten clean sheet. Her save percentage was 82.4, which was in the top five of the conference.

Not only were Mijares and Elbro at the PSAC Western Division All Conference First Team, but they were also accompanied by junior defenceman Taryn Baxter and Amber Thomas. Junior mid-fielder Madison Hoover received Second Team All-Conference honors also. Mercyhurst has been ranked eighth in the regional rankings that have been released.