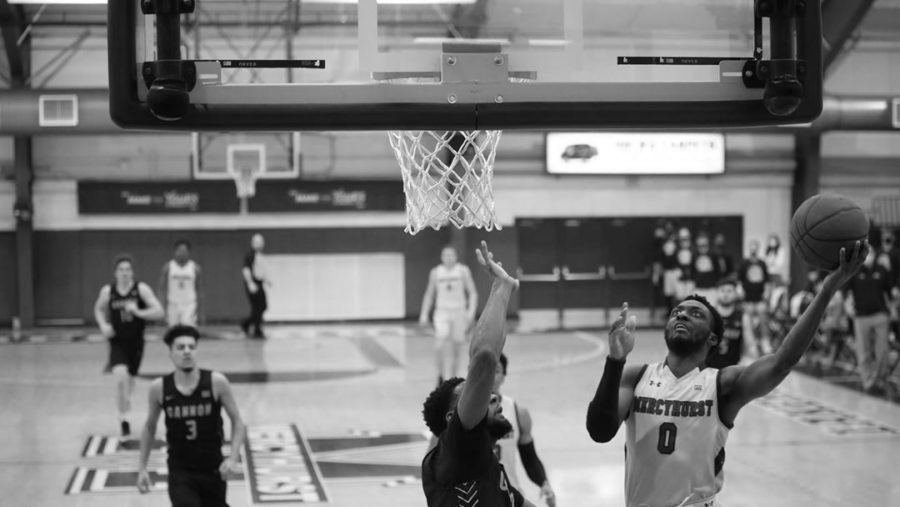 With their overall score last season being 12-1, the Mercyhurst Men’s basketball team is back at it again with their winners’ energy. This past weekend on Nov. 12 and Nov. 13, the Lakers traveled to Shepherd, West Virginia to play against Bowie State University and Fayetteville State University in the Dave Russell Conference Challenge, which is a tournament hosted by Shepherd University.

Both Bowie State University and Fayetteville State University were selected to finish first in their respective conferences for the CIAA Preseason Poll, which makes the Lakers’ performances even more impressive.

“We played two good teams. This tournament was a great opportunity to show how great our team chemistry is and the excitement to get back on the floor,” said forward graduate student, Cameron Gross.

The Lakers first played the Bowie State University Bulldogs on Nov. 12 and dominated the game, coming out with a 96-56 win. Starting strong, the Lakers put nine points on the board within the first three minutes.

Senior guards, Steve Cannady hit a three, MiyKah McIntosh scored four and Nicholas Lang got a layup. With four players who had scored at least five points, at the end of the half, the Lakers dominated 48-17. Cannady led the team with 15 points, McIntosh had nine, junior guard Michael Bradley had eight and Gross had seven. In the first half, the Lakers shot 57.1% from the paint with 33% on three-pointer attempts.

The Lakers doubled their score in the second half, adding another 48 points. The Bulldogs were able to break through the Lakers’ defense and score 39. McIntosh and freshman Pipeloluwa Ajayi both had eight points. In the second half, the Lakers’ statistics both declined slightly and improved with 56% from the paint and 44.4% from behind the three.

Cannady and McIntosh both had game highs with 17 points each while 14 of the 18 players on the team had points on the board for Mercyhurst. Mercyhurst had 13 steals total for the game along with blocks from redshirt sophomore guard Jeff Planutis, Lang and Bradley. The following day, the Lakers played the Fayetteville State University Broncos and took home a win with a 17-point deficit for a 77-60 win.

In the first half, the Lakers and Broncos fought hard, but Mercyhurst prevailed with a one-point lead for a 32-31 score on the board. McIntosh and Planutis tied to lead the Lakers with seven points each for the half. Two of the Broncos’ players scored the same half-time scoring high. Both the Lakers and the Broncos had a 40% shot accuracy from the first half.

At the start of the second half, the Broncos came out hot from their gate and took the lead within the first five minutes. They scored six points, turning the tide of the game for a 48-42 lead. Mercyhurst was able to take back control for the rest of the game which would lead to the game’s final score. Cannady hit his free throws to score 12 points halfway through the second and Bradley put 11 in the back of the net as well. Cannady finished the game with a team-high of 18 points.

Freshman Aidan Reichert scored 12 and got five rebounds along with Lang’s nine points from the free-throw line. Together the Lakers outscored Fayetteville State 28-12 in the final ten.

“I am very proud of my team on playing hard, and playing together throughout the weekend especially with guys making clutch plays in Saturday’s game,” McIntosh said. “I feel like I helped impact my team on both ends of the floor, and I am look-ing forward to doing whatever my team needs to do the rest of the season.”

The Lakers’ next game is scheduled for Nov. 18 at the newly renovated Mercyhurst Athletic Center versus Daemen College at 7:00 p.m.