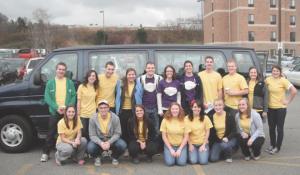 Alicia Cagle photo: Volunteers from Mercyhurst traveled to New Orleans over Thanksgiving break to help rebuild homes destroyed by Hurricane Katrina.While most of us were chowing down on turkey and stuffing on Thanksgiving and getting the best deals on Black Friday, some Mercyhurst students were volunteering their time to help others.

Six years ago, Hurricane Katrina swept through New Orleans destroying much of the city. Today, people are still dedicating their time to help in the rebuilding efforts.

When the 15 students and three chaperones arrived to help rebuild in New Orleans, they were split into three teams of six and helped at several sites where they worked on aspects from demolition, to dry wall, and painting or insulating.

Adrianne Lagruth learned at both sites she worked on that the “homeowners had been victims of contractor fraud, had a majority of their money stolen, and we’re rebuilding only what they could based on the donations through the PNOLA foundation. There are people without roofs, electricity, gas power, plumbing, and basic utilities we take for granted,” she said.

Dean Atkins, one of the supervisors of the trip who represented Mercyhurst, explained that in addition to helping to reconstruct homes, they also got to work with hundreds of volunteers to construct a playground as a part of a KaBoom build in a struggling neighborhood.

“In the space of six hours, we took a derelict playground to a safe, fun environment for the community,” he said.

Alicia Cagle, a Mercyhurst student, also explained that it was more than building a playground. She said they painted murals, put together picnic benches, made checkerboards and put in mosaic sidewalks.

This project was a highlight of many of the students who attended the trip and Hurley described it as a “transformative experience for everyone involved.”

Atkins and Cagle both agreed that their experience in New Orleans was fantastic.

They had the opportunity to meet new people and see another part of the country, while helping others in need.

Alicia pointed out that, “Even though the state of New Orleans after Hurricane Katrina is not being addressed in the media, it is something that still needs a lot of work done.”

Although they were only in New Orleans for a week, the group who went on the trip really made a difference.

A homeowner of one of the houses made Thanksgiving dinner for the group because he considered them family after everything they had done for him.

Although Collin Hurley could not attend the trip, he heard a lot of positive feedback from the students.

“The simplicity of sharing homemade gumbo with a homeowner or sharing laughter with new college friends while helping to build houses is a one-of-a-kind memory,” he said.

LaGruth said, “The rebuild is far from over, these people still need help.”

There is still a lot of work to be done in New Orleans. Most volunteers usually go during the summer, so it was important for groups, like the students and advisers from Mercyhurst College, to go during break to fill the gaps this time of the year.

“In order for homes to keep progressing towards completion they need a constant stream of volunteers,” said Atkins.

If you are interested in helping to rebuild New Orleans, contact the Service Learning Office to find out when the next opportunity to help is.

“That is what the 18 of us did on this trip. We came together and we made a difference,” Lagruth said.