Baroque opera comes to the Met with 'Rodelinda' 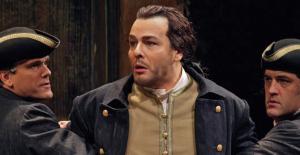 This dramatic baroque opera is filled with deceit, treachery and tyranny.

Grimoaldo has usurped the throne, and King Bertarido has fled in fear of his life leaving his wife, Rodelinda and son behind.

Grimoaldo wishes to marry the queen to ascend to the throne legally. Rodelinda believes her husband is dead, but still refuses Grimoaldo’s advances. The king’s sister, Eduige, is heartbroken over Grimoaldo’s newfound love for her sister-in-law.

Bertarido, who is not dead, returns to the palace to help his wife and son flee into exile. His friend, Unulfo, helps him, but Bertarido is captured while meeting with Rodelinda.

With help from Eduige and Unulfo, Bertarido escapes from prison. Grimoaldo, unaware of his surroundings in the garden, does not hear his approach.

Grimoaldo, amazed by his enemy’s righteous behavior, returns the throne to the rightful king. Righteousness prevails, and peace and harmony are restored to the kingdom.

Something that usually does not occur on the Metropolitan Opera stage is the staging of a full-length baroque opera.

During the 18th century, opera was designed for a very intimate setting. The opera houses and stages were much smaller.

When the performers were interviewed during the intermissions, they all spoke of how they were coached on how to use the “da-cappo” section to show off range and also change it slightly with ornamentation to make the repeated section different from the first—this was common practice during the 18th century.

Another reason why baroque operas are seldom performed on the Metropolitan stage is that in some the roles call for “castrati”—males who are castrated before puberty so that they would keep the vocal quality of a soprano or mezzo-soprano.

Today, typical castrati roles are now played by countertenors—men who have a developed falsetto voice with the quality of a soprano or mezzo.

Junior Adam Ferrari added, “Countertenors are rare. You don’t get to see them too often.”

Junior Kirstan Orgel said, “It’s a unique sound. It is true that countertenors do not appear much in operatic performances. It is more common to see them in a concert setting with orchestra,” she said.

The next Live in HD broadcast will be Charles Gounod’s Faust, on Saturday, Dec. 17, at 1 p.m., starring Jonas Kaufmann in the title role.

This modern production of Faust has been anticipated as one of this season’s must-see operas. For ticketing information, call the box office at 814-824-3000.