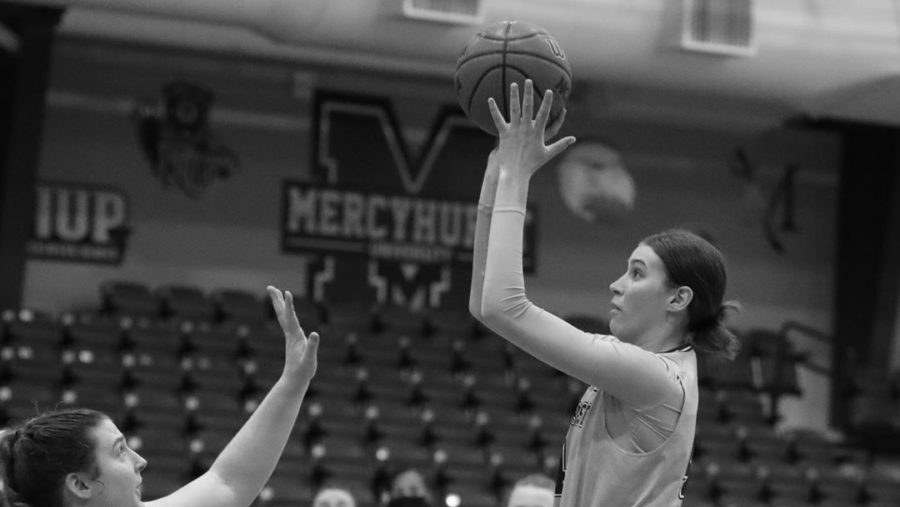 The Mercyhurst Women’s basketball team took on the Vulcans of California University of Pennsylvania in their game on Saturday, Feb. 5.

After the Lakers took the early lead and protected it throughout the first half, the Vulcans came back to win 68-60 at the end of the day, which left the Lakers overall record at 7-13. Most of the first quarter was filled with lead changes until junior Jayde Boyd buried a three-pointer to put the Lakers ahead 11-9.

This lead was kept alive by redshirt freshman, Grace Centrulla, due to her couple of layups, and redshirt junior Julia Buchman’s three pointer. Centrulla finished the game with 22 points and 10 rebounds to account for a double.

Other leading scores in the game include redshirt senior, Emily Shopene with seven points and redshirt freshman Grace Clary with six points. Mercyhurst kept their lead of five points at the end of the first quarter and ended up outscoring the Vulcans in the first.

The second quarter brought about some challenges as the Lakers only made two shots from the floor. However, they were able to hold onto their lead against the Vulcans going into halftime as they went 8-10 from the free-throw line.

California University of Pennsylvania came back in the second quarter to notch a win over the Lakers ending with a final score of 68-60. With motivation drawn from this game, the Lakers look ahead to next week as they have another opportunity to compete on their home court.

The Lakers played hard against Indiana University of Pennsylvania (IUP) Crimson Hawks on Mon. Feb. 7 at 5:30 p.m. at the Mercyhurst Athletic Center in a key game for the PSAC standings.Despite a well-fought battle against the Crimson Hawks, the Lakers fell behind in the second half, losing the game 68-51.

The Lakers started the game strong with the first score from Shopene. This would be the first two points for Shopene who ended the game as a top scorer with 15 points and nine rebounds. Over the next two quarters, the Lakers and the Hawks kept the game close. IUP was up 27-25 to close the half. The Crimson Hawks did not let up on the Lakers as they exploded with seven straight points to open the half. Mercyhurst was able to close the gap to only 49-42 going into the fourth quarter. IUP solidified their lead in the last quarter to 12 points and winning the game with a 68-51.

Jayde Boyd was the second highest scorer for the Lakers with 14 points. The Women’s basketball team will take on Erie rival Gannon University tonight in the Mercyhurst Athletic Center. Tip-off is scheduled for 5:38 p.m. and will be featured on the CW network. Fans are strongly encouraged to purchase tickets in advance of tonight’s game as it is a double header with the Men’s game against Gannon as well.

Renovations to the Owen McCormick Court at the Mercyhurst Athletic Center created an environment for the Lakers that is truly unique to them and their way of play. As sports have always been a way to bring peoples’ spirits together, there is no better place and time to feel more at home than with some friendly competition. Watching the Lakers compete with their fiery spirits against Gannon will surely be a great way to engage with your community and celebrate the hard work that these young athletes and their coaches put into every day.