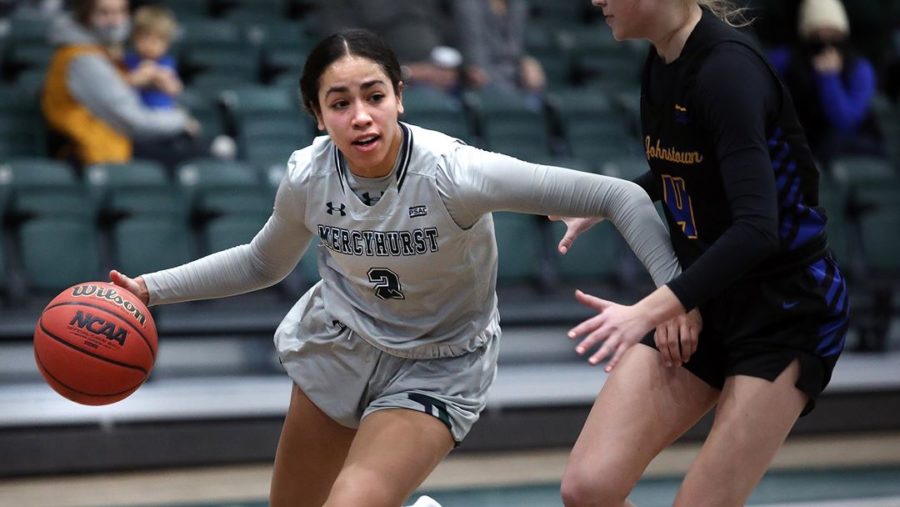 It was a good weekend for Mercyhurst basketball, with both the Men’s and Women’s team bringing home a win. The Women’s basketball team played on Saturday, Feb. 19, at 5:30 p.m. with the Men’s basket-ball team following at 7:30 p.m.

The last time the Women’s basketball team faced Edinboro on Jan. 19, the game went into two overtimes. However, that was not the case for this game and the Lakers carried out a win with a final score of 76-66.

The Edinboro Fighting Scots took the lead within the first ten minutes of the game and were ahead 21-15. The Lakers started to make a comeback in the second quarter of the game. At 5:23, redshirt junior Julia Buchman had a layup tying the game with a score of 26-26. The Lakers then took the lead due to a three-pointer from redshirt freshman Grace Clary.

Junior Jayde Boyd made a three-point shot giving the Lakers a lead of 32-28 at the end of the second quarter. In the third quarter, redshirt freshman Grace Centrulla, Boyd and redshirt senior Emily Shopene all combined for 20 points. The Fighting Scots could only put up 19 points. The score at the end of the third quarter was 51-48 in favor of the Lakers.

Edinboro took the lead early in the fourth quarter; however, the Lakers made a comeback with a score of 61-58. In the last few minutes of the game, the Lakers made seven free throws and Edinboro turned to a foul game in the final minute. The Lakers managed to pull out the victory with a final score of 76-66. Their next game will be played on Saturday, Feb. 26, at 1 p.m. against Slippery Rock.

The Lakers once again took the win with a resulting score of 91-63. During the beginning of the game, both teams were tied up. However, the Lakers took the lead at 15:44 due to a three pointer shot made by senior MiyKah McIntosh.

Mercyhurst had a 12 point run that resulted in a score of 17-9, in favor of the Lakers. The Lakers kept the lead, and the score at the end of the first half was 42-31.

The Mercyhurst team maintained their lead during the third quarter. Redshirt sophomore Jeff Planutis and freshman Pipeloluwa Ajayi both had breathtaking dunks.In the final minute of the game, Mercyhurst was up by 26, but that changed when graduate student Marcin Wiszomirski shot the three-pointer to top the final score of the game to 91-63.

The Men’s basketball team will face Slippery Rock at 7:30 p.m. on Saturday, Feb. 26, with another back to back match after the Women’s basketball game.