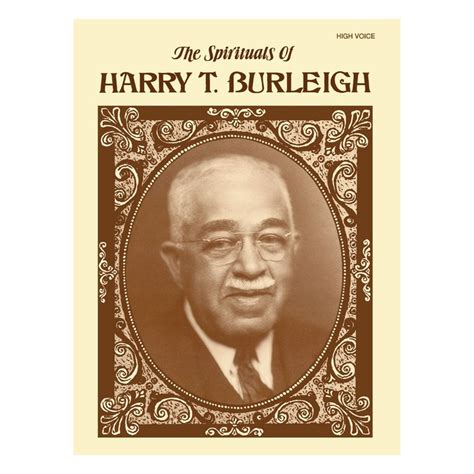 In his early life, Burleigh helped support his family by working as a newspaper salesman, a gas streetlamp lighter, and a Lake Erie steamboat steward. He discovered his love for music when working as a doorman for parties in which renowned musicians were invited to play.

He began taking voice lessons from George F. Brierly and by the time he reached college age, Burleigh was considered one of the strongest vocalists in Erie.

He continued his musical studies at the National Conservatory of Music in New York, where he had the opportunity to play the double bass in the school’s orchestra.

Throughout his life he composed over two hundred works, many of which are still adapted into worship today. Some of his most influential pieces include “Deep River,” “Till I Wake,” and “Didn’t My Lord Deliver Daniel.”

Aside from his influence on gospel music, Burleigh also helped pave the way for other Black musicians moving into the 20th century.

Throughout his career he faced several instances of adversity due to his race, such as being rejected from the position of soloist at St. George’s Episcopal Church of New York by the congregation, only to later secure the spot through his hard work and talent.

Several pieces by Burleigh are inspired by African American plantation songs that he learned from his grandfather who was a freed slave, with the intention of preserving them for generations to come. Burleigh’s grandfather is where he was first taught how to sing alongside his brother, Reginald.

The Harry T. Burleigh program hosted by Tuesday Night Catholic Devotions provided an opportunity for attendees to come together and celebrate community, spirituality, and Black history.

“Through the event, attendees were able to sing together, learn together, and share reflections with each other. The group seemed to really enjoy it, and it brought together students coming from campus ministry, from the music department, from BSU, as well as a few employees,” said Scully.

The student leaders of Tuesday Night Catholic Devotions collaborated with Brittany Barko-Krugger who is a professor of liturgical music and music therapy.

Additionally, they had Cheryl Rush Dix, Vice President of the Burleigh Legacy Alliance in Erie, come in and present on some educational pieces about Burleigh.

Barko-Krugger played a few of his songs and encouraged attendees to sing along.

The event opened a space for visitors of Tuesday Night Catholic Devotions to expand their knowledge of gospel music as well as the rich history of Erie.

“I think that for many that had grown up in or had spent significant time in Erie, they were surprised that they knew so little about Harry T. Burleigh! The group is hoping to do a similar event again next year,” said Scully.

Tuesday Night Catholic Devotions hosts a wide variety of events as they try to not just do the same thing every week. This event was a great way to honor an Erie native and wrap up Black History month as February was coming to an end.