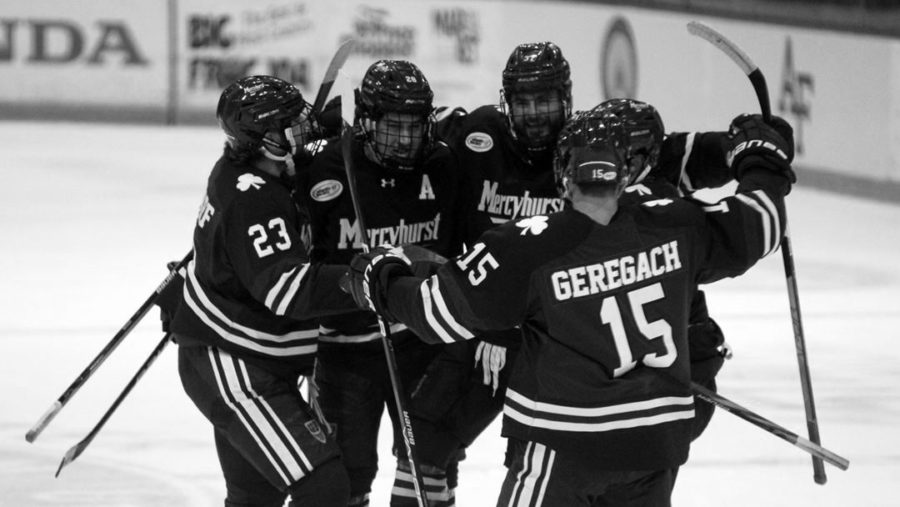 On March 18, the Mercyhurst Men’s Hockey team went up against American International College in the Atlantic Hockey Association Semifinals in Utica, New York.

The Lakers have been crushing their opponents in these semifinals. However, their season ended on Friday when our men fell to the Falcons. The Lakers started out the first period by being outshot 13-4. However, this did not stop sophomore forward, Dante Sheriff, from taking a 1-0 lead.

After making the most of an AIC turnover deep in the opposing zone, at the opening of the period at 12:32, he put the Lakers ahead. This was a great start for Mercyhurst.

The second period was all a tussle back and forth with two goals from both teams. AIC scored their two goals first. Seeing this, our boys put on the pressure and hit back with two of their own. Sophomore forward Austin Heidemann, made the first goal by deflecting off a shot from senior defenseman Devon Daniels.

The AIC goalie was way out of position from Daniel’s shot and Heidemann made the most of it and took his. Junior forward Rylee St. Onge came in with the second goal scored on a power play from an assist by senior defenseman Josh McDougall. This would give the Lakers a 3-2 lead with five minutes left in the second period.

It was looking pretty good for us. By this point, sophomore goalie Kyle McClellan had a grand total of 28 saves. It was a tie game by the end of the second period. The third hung in the balance. Who would break the tie? When asked what his mindset was going into the third period, senior Own Norton said,

“Just do whatever it takes to win. They are a hell of a team over there. You can’t sit back and wait and see what they’re going to bring. I mean, you have to go up and get the next one.”

In the third period, AIC would come out on top with three more goals. One was even an empty netter pushing the score to 5-3. However, our Lakers did not give up. With a second goal from senior forward Rylee St. Onge with an assist sophomore forward Mickey Burns. With only 1:20 left in the period, they pushed the final score to 5-4.

It was a narrow loss. McClellan rounded out his sophomore season with 44 saves in his tenth game of the season. Head coach Rick Gotkin talked about what he was most proud of from the team this sea-son.

“I’m just proud with how they embraced it, and we just got better as the year went on,” Gotkin said. “We got lots of great leader-ship. Pierce Crawford and Geoff Kitt, our number of seniors. You know, I’m happy for the senior class.”

The men’s hockey team had a great season. A long season of wins and losses and making it so far in the playoffs. They should be extremely proud of themselves. This concludes their season, but the hockey team will come back for more, like they always do, next year.