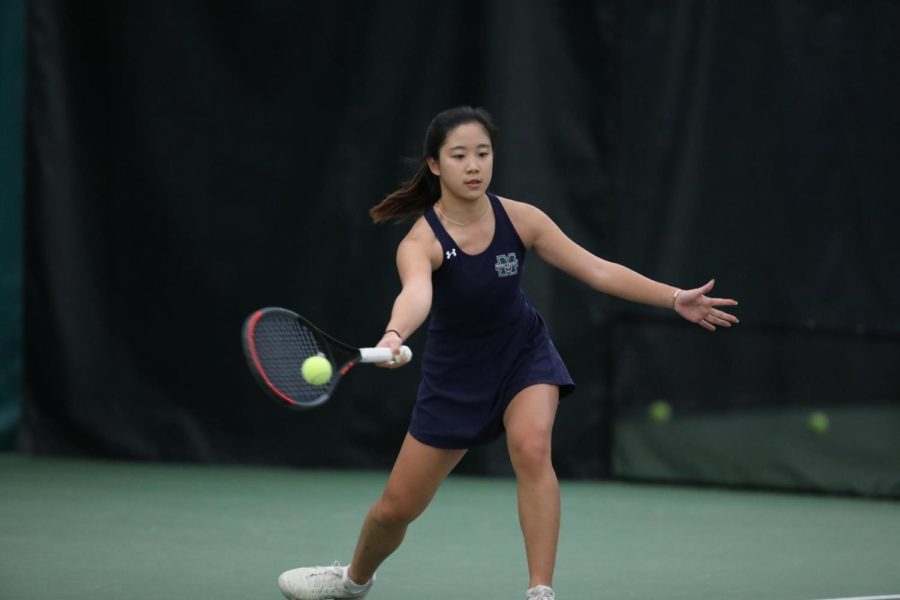 Both matches were played in Erie, PA at Westwood Racquet Club. The first match resulted in a win for Mercyhurst with an ending score of 7-0. The Lakers started their back to back weekend matches by winning two of the three double matches played on Friday afternoon.

“I am extremely proud of our team,” Head Coach Jerome Simon said. “We have played the toughest schedule since I have been here and now those difficult matches are paying dividends.”

The pair of freshman Kayla Dean and Roisin Murphy won by a score of 6-2. Senior Naomi Jahr and junior Nadja Ostojic swept the West Chester Rams with a final score of 6-0. In the singles match, the Lakers swept all six of their matches in straight sets. Freshman Sara Bertolez Puente had a perfect match winning 6-0, 6-0. Dean won her match 6-3,6-2, and Murphy won her match 6-1, 6-2.

“After these last wins, I am looking forward to the upcoming conference matches. Also, getting such good scores makes me feel much more confident, both physically and mentally,” said Bertolez Puente.

Jahr swept her singles match 6-4,6-2 and Ostojic won with a score of 6-1. Sophomore Valentine Budin closed the Lakers singles match with a 6-2, 6-1 score.

The second game was played on Saturday, March 19, against Millersville University. The Lakers once again brought home a victory, resulting in a three game winning streak. All three of the games were played at home. “The team’s support is very helpful especially in decisive moments, such as breakpoints or tie-breakers,” said Bertolez Puente in regards to the team’s backtoback win.

The ending score was 6-1 in favor of Mercyhurst. The Lakers swept their three singles matches. Dean and Murphy came away with a 6-3 win and Jahr and Ostojic earned a 6-4 doubles win. Junior Janice Theodora and Bertolez Puente ended the doubles with a 6-2 win, in favor of the Lakers. In singles, the Lakers won five of the six matches with Dean having a score of 7-5, 6-; Jahr 6-4, 6-4; Ostojic 6-2, 6-1; Murphy, 6-0, 6-0; and Bertolez Puenete 6-2, 6-; all earning points for Mercyhurst.

“We are constantly evolving and keep trying to master the fundamentals.” The Mercyhurst women’s tennis team will be facing West Liberty University next in West Liberty, West Virginia on Tuesday March 22.

“I absolutely feel the team is prepared for Tuesday’s match,” Bertolez Puenete said. “Even though West Liberty is a stronger team than the previous we have played, we have also been playing better, so I feel it will be a good opportunity for us to show our work over the past months.”