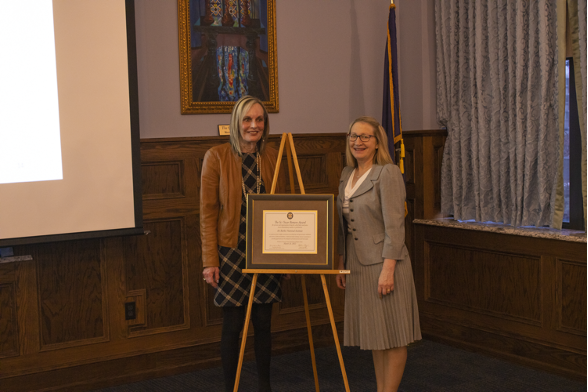 On March 24, 2022, the Barber National Institute for people with mental and intellectual disabilities has been awarded the Archbishop Oscar Romero Award by Mercyhurst University.

The award was in honor of Archbishop Oscar Romero, who was a Salvadoran Archbishop of San Salvador and was murdered by the military regime for speaking up for the poor and marginalized and for also speaking up against the regime. He was later canonized as a saint in Oct 2018 by Pope Francis.

Like Oscar Romero, Gertrude A. Barber spoke for the marginalized, who were children and adults with mental and intellectual disabilities. Gertrude Barber was born on September 16, 1911, in Erie, Pennsylvania.

She had a passion for learning at an early age, which was recognized by the Sisters of Saint Joseph, who were her teachers at Saint Ann’s Church and School. In 1933, at the age of twenty-two, she became a teacher in the Erie School District.

In 1952, she opened the first classes for young students with intellectual disabilities in the Young Women’s Christian Association (YWCA) Center in her hometown.

In 1962, John F. Kennedy appointed Gertrude Barber to be one of twenty-five experts on the National Task Force on Mental Retardation. She would later be one of the attendees to the signing of the Americans with Disabilities Act by President George H. W. Bush at the White House in 1990.

In the early seventies, as thousands of people with disabilities began to leave institutions, the Barber Center began to open the first community group homes in Erie and started programs in 1973, for those who were returning from Polk State Hospital.

She continued to do her charitable work on people with disabilities until her death on April 29, 2000, at the age of 88.

At the event, the speaker was the niece of the late Gertrude A. Barber, Maureen Barber-Carey. She is currently the Executive Vice President of the Barber National Institute and is a current member of the Autism Focus Group for the Pennsylvania Department of Education.

The Barber National Institute is located on 136 East Avenue in Erie where the former hospital used to be. The institute does quarterly publications of the Barber Spirit, which is meant to spread Barber’s legacy.