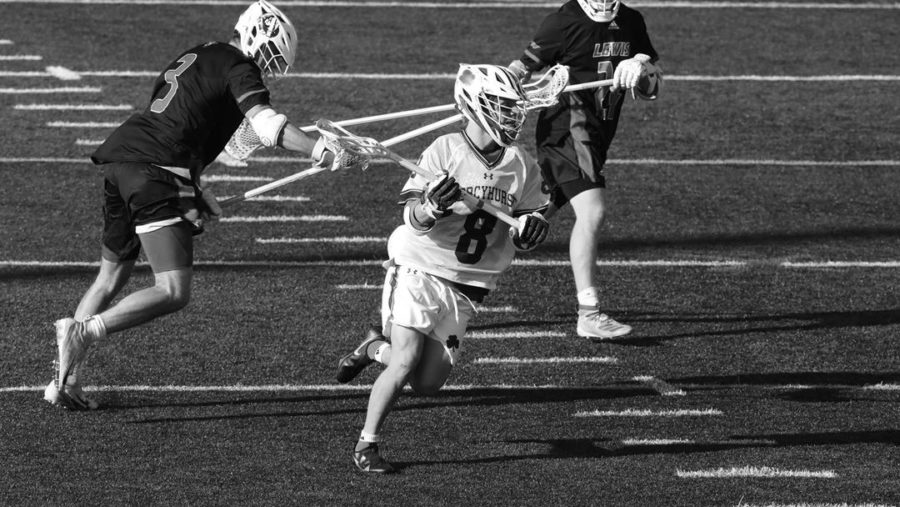 The Mercyhurst men’s lacrosse team got their fourth win in a row this past weekend in a game played against the Chestnut Hill College Griffins. The game was at noon and was played in Philadelphia, Pennsylvania.

The men’s lacrosse team has played eight games so far this season and they have won five out of the eight games.

“I have been happy with the effort the team has put forward this year so far,” said Men’s Lacrosse Coach Christopher Ryan.

“We lost two games early but the guys played hard. The games of late have been decidedly in our favor but I believe the team has played well in those games and handled business as they should have.”

The away game victory ended with a score of 17-9 in favor of the Lakers. The game started with six different Lakers scoring in the first 15 minutes of the first quarter, which led to a 7-1 lead for the Lakers. The first Laker to score in the game was junior David Fiorini, who scored just eight seconds into the game.

Junior Bryce Johnson and sophomore Ethan Landymore scored soon after Fiorini earned the first point of the night. Chestnut Hill scored at the 8:55 mark of the first quarter. However they did not let that goal stop them, both senior Nicholas Made and sophomore Collin Schmatz scored to finish the quarter.

The Griffins managed to score first in the second quarter, but soon after, the Lakers went on a four point streak that lasted throughout the rest of the quarter. Landymore scored two of the four goals resulting in his third goal of the night. Junior Myles Hamm racked up the other two goals for Mercyhurst.

In the fourth and final quarter, Landymore, Hamm and Johnson all scored again.

“It feels really good to score goals, but it isn’t just about scoring. Although I am very thankful for the four goals we scored, we played as a team, and that is what feels the best,” Landymore said.

“I’m more thankful for the guys on the team who assisted my goals. It was a team effort.”

Although the Lakers scored three more goals in the last quarter, they were out-shot by the Griffins.

“Credit to Chestnut Hill they gave us problems in some areas of the game and we were exposed a bit,” Ryan said.

“Not sure our response was the best. We need to be tougher between our ears if we want to knock off one of the best teams in the nation Saturday at Mercy.”

Despite the four goals scored in favor of Chestnut Hill, the Lakers still brought home the win with a final score of 17-9.

“It is always great to win and we will never apologize for being successful but I would have liked,” Ryan said.

“I am sure the guys would agree, to get a more complete effort on Saturday against Chestnut Hill.”

Junior goalie Brett Olney received his fifth win of the season. Olney stopped 11 of Griffin’s 20 shots that were taken against the Lakers. Junior Stephen Katz led the Lakers with three caused turn-overs and junior Shawn Doran got 18 of 24 faceoff chances to go along with 12 ground balls.

“We have a few things that we need to clean up and perfect throughout this week, but when it comes game time we will be ready for anything that is thrown our way. Mercy will be one of our toughest opponents,” Landymore said when asked if the team feels ready to compete against Mercy College.

The Mercyhurst men’s lacrosse team will be facing Mercy College in Dobbs Ferry, New York at noon on Saturday, April 2.

“We need to come mentally ready to play against this high-lev-el opponent. As a team, it is important to continue to grow and get better, rather than becoming complacent,” Landymore said.