Review: “Saturday Night” impressive show on any day of the week 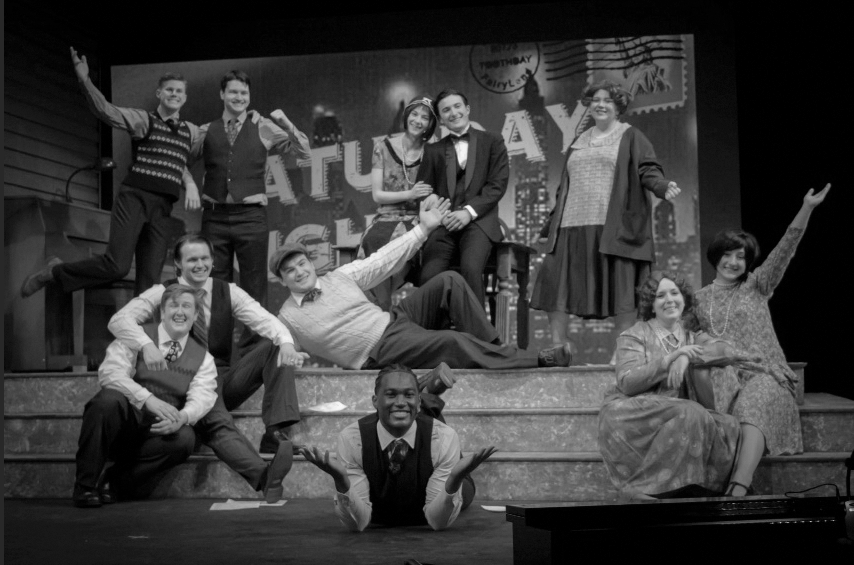 The theatre program at Mercyhurst is one of many hidden gems here on campus. These astronomically talented humans always show talent, confidence and drive to make each show better than the last. This past production was just their newest addition to their resume of incredible shows. Hidden away in the Taylor Little Theatre under the library, the show did not let the small venue dull its sparkle. The talent booming from the small space made it seem like the stage of Broadway.

“Saturday Night” is a musical written by Stephen Sondheim, based off the book by Julius J. Epstein and Philip G. Epstein, “Front Porch in Flatbush.” The show is based in the Roaring 20’s, when the stock market was up, people were buying everything they could see and everyone was trying to become a millionaire like J.D. Rockefeller. The show is so light and airy that one almost misses the incredible lessons that lie beneath the musical notes.

Main character, Gene Gorman, played by junior Braden Rosciszewski, is trying any way he can to make money in the stock market. Gene claims that he isn’t supposed to be poor; he was born to be rich. In the process of trying to increase his status, he ends up with a mismatched puzzle that he needs to put back together to stay out of jail. As Gorman is trying to figure all this out, his friends look on and shake their heads.

“To me, and specifically, my character, Saturday Night was about escapism, adulthood/responsibility and authenticity,” Rosciszewski said, “Gene was a very complex character that de-sired more than he had without even realizing the riches he had in front of him.” Braden is a Sport Medicine major with a minor in Theatre. Growing up around the arts with his siblings, theatre was naturally injected into his life. However, he didn’t fully jump in until the end of high school and even more in university.

“I have been doing theatre for three years now, with my debut being the world premiere production of ‘A Dicken’s of a Carol’ at Mercyhurst.” Braden loved his character, Gene, saying, “There’s still quite a lot I’d like to work out with this character, but part of the fun of live theatre is that you never get all the answers and are left to wonder what else you could have discovered.” This was a play that I could watch unfold over hundreds of acts. I never got tired, so I agree with Braden about wanting to know what Gene’s next moves were off the stage.

The boys, Dino, Artie, Ray and Ted, all from the same house in Brooklyn, watch Gene tangle himself in this web of lies and money. The boys were played by Kirk Morrison, Ben Vacca, Elijah Cowles and Rondale Smith. However, they get dragged into this mess with their friend by trusting him in his biggest weakness. By giving him money to invest for them in the stock market, they actually enable Gene’s gambling and lies more.

Junior, Rondale Smith shared his favorite moment from the play, “My favorite scene would have been the club scene with the trumpet player and singer. That was a nice scene and one of my favorite songs.” The song was jazzy and smooth with Ali Forsythe vocalizing and suave Kirk Morrison on his beloved trumpet.

Smith is a Psychology and Criminal Justice double major, and a very, very busy man here on campus with theatre, football and Mercyhurst Ambassadors to keep him running around campus. His resume would make anyone’s head spin. Smith explained how he pre-pared for opening night, “I actually had a lot going on just with football, school and social life, but how I prepared was by praying, reading the Bible and taking time out of my schedule to just breathe. Having a clear mind and taking time to rest and meditate on the word of God helps a lot.”

Junior Kirk Morrison, who played Dino, also told me about his preparation for opening night. “Some of my preparations were lots of script analysis, accent work and memorization.” You’ve got to learn those lines somehow. Morrison is an extremely talented music man. He is a Music Education major here at Mercyhurst. Morrison made his theatrical debut in this very production! I was shocked when he told me.

“I have actually never been involved in theatre before this show. I decided to give it a try since I am involved in most other art forms, but not theatre.” Morrison is such a natural that I was so amazed that this was his first play in his three years here at Mercyhurst. He was such a natural character up on stage and had the crowd laughing with his antics and small one-liners that were written to be barely noticeable. When one paid attention, his was definitely one of the funnier characters.

However, there is only one person that brings Gene to his senses in the end, and this is Helen Fogel, played by sophomore Tori St. John-Gilbert. This hip flapper girl meets Gene as they are both trying to get into a dance club that they both have lost their tickets for. Gene is instantly in love. Not only is he trying to impress his friends with his status, but now he is wowing his new belle, as well. As Gene’s problem gets bigger, so does Helen’s dislike for his materialism.

St. John-Gilbert is a native Texan and a sophomore Dance major. She has the most incredible voice and was so astounding in her two-face role of Helen. She started doing theatre in elementary school but had another love that she had to attend to. “I took a pause from doing a lot of theatre in high school because I started to take dance more seriously. I would do productions growing up here and there in the summers when I could, but I didn’t really do much of anything with my high school theatre department, so it’s been absolutely lovely doing this show.”

Many actors want to find something from their character to connect to. “There are a lot of aspects of her character that I can relate to, but one is that she is someone who wants a life larger and more extravagant than she has, but she doesn’t quite know how to go about getting it,” said St. John Gilbert. She has big dreams of being in theatre or in the dance world for a long time after schooling. I don’t think she’ll have any issue; she is so talented!

Overall, this play was incredible. The vocals, music, acting, and costuming were so accurate and mind blowing. I couldn’t believe we have so much talent on campus in such a small space. These students work so tirelessly to put on a quality show for people they don’t even know. If you missed this show, you missed out, but keep your eyes peeled for anything new from the Theatre Department!