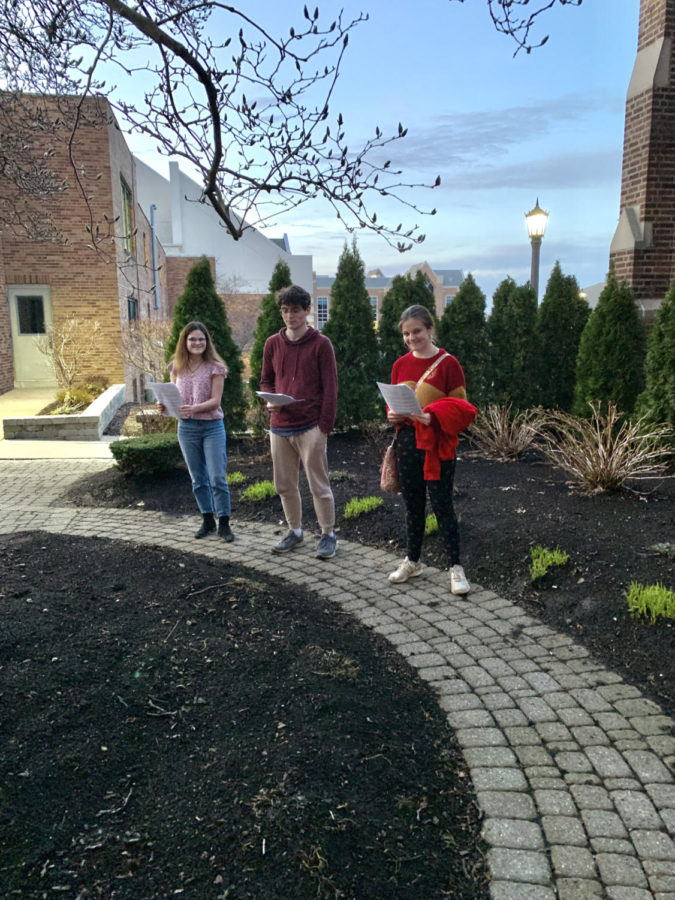 On April 12, the Tuesday before Easter Break, the Tuesday Night Catholic Devotions (TNCD) group hosted a Stations of the Cross walk around campus.

TNCD always tries to hold an event that pertains to Easter. It all depends on how much time there is to prepare and what supplies might be needed.

“The year before that we walked around Christ the King Chapel, from one station to another, and read biblical passages,” said Olivia Gaffron, senior criminal justice major.

“We passed out paper booklets to everyone and had our friend Jake play the piano and sing songs such as, ‘Jesus Remember Me,’ from Taize.”

“It was such a blessing that we were given such wonderful spring weather. It was warm, and I truly enjoyed walking around the campus with the group,” Gaffron said.

Not only did participants have the chance to reflect on Jesus’ life, death, and sacrifice, but they also reflected on the past year of their own lives.

The event that TNCD holds varies from year to year, but participation in the group has gone down, so TNCD leaders have to improvise.

“In 2019, we had actually planned a Stations of the Cross where the leaders, along with some helpers (and maybe MYRACLE too), acted out the stations in the front of Christ the King Chapel,” Gaffron said.

“We found costumes and props and we had a small gathering of people show up.”

The leaders of TNCD are students and are always looking for different activities to do that group members will enjoy. The point of the group is to take away stress, not put more of it onto students.

TNCD is a Campus Ministry group that meets every Tuesday at 7:30 p.m. Some of their activities, like the Stations, are Catholic-related, but some of the other activities held are more geared toward fellowship among participants.

Some of the other activities that TNCD has hosted in the past are paint nights, baking nights, rosary-making, and vision board making.

Once a month, TNCD hosts Eucharistic adoration and exposition in Christ the King Chapel. This includes periods of silent prayer and song. Fr. Jim Piszker is also available for confessions during adoration.

Overall, TNCD is a group that will welcome anyone, Catholic or not. Anyone who chooses to join does not need to commit to showing up every week, only when they have the time.