Get to know Hurst’s volleyball coach 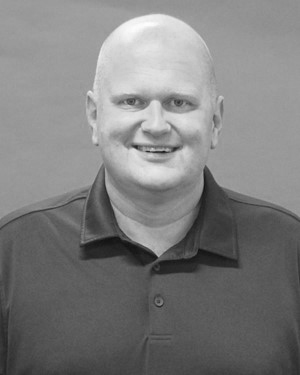 Ryan Patton has loved volleyball for the majority of his life. Growing up, Patton has been exposed to high levels of play and ‘volleyball thinking’. He stated that he has never had the chance to not love the sport.

Throughout his life, his father coached volleyball and was in three halls-of-fame because of it. Patton participated in his first state championship game when he was 10 years old. When asked about his past experience with playing volleyball Patton stated,

“I’d probably sell myself short if I didn’t say I was a pretty good player. Anyway, I was probably as successful as a guy with the explosiveness and hangtime of a washing machine could be.”

Patton attended Juniata College and majored in math. Juniata College is a small college in central Pennsylvania that consists of 1100 students. Although Patton graduated with a degree in math, he also got his Masters Degree in Physical Education in which he is utilizing to make a very good career for himself as a volleyball coach.

Patton started his coaching at Juniata College and coached there from 1996-2002. While he was a coach at Juniata, his team won the Molten Division III National Championship in 1998.

In 1999, Patton’s team was the first Division III team to advance to the semi finals of the Eastern Intercollegiate Volleyball Association. Patton has been coaching volleyball at Mercyhurst for 18 seasons. He started coaching in 2005 and has continued ever since. During his time at Mercyhurst, Patton was named PSAC West Coach of the year in 2008.

“For at least the last six weeks of last season we played at an NCAA tournament level. I’m so happy with that,” Patton said. “Unfortunately before that we had a health issue we had to deal with and were frustratingly ‘close enough’ but didn’t have the results to actually get us in the tournament. I hold my head real high.”

Patton said the team has potential to achieve some neat things and he stated the team has the principles and precepts that make them bound for greatness. One of Patton’s best memories as a volleyball coach is “seeing the team enjoy a hard-earned win and countless successes of my players both big and small, on and off the court.”

However, he also made it to the men’s D II national championship in 1998. In addition to volleyball, Patton also enjoys the sport cricket in his spare time.

“I’m pretty obsessed with the sport of cricket and set alarms to watch games in India and Australia,” Patton said. He also collects books and loves going to book sales to collect used books.

“I have a library of over 1500 volumes and to answer every-body’s next question, no I haven’t read all of them,” Patton joked. Patton is not the only member of his family to work at Mercyhurst. His wife Jenell Patton works in Campus Ministry and also works with the volleyball team.

The Pattons have two sons, Deke, who is 17 and Ike, who is 15. Both boys are keeping the volleyball tradition alive in the family. Patton is excited for the next season of volleyball.

“Progress is what drives me, so I’m always excited for the next season, the next match, the next practice,” Patton said. “This should be a fun group to head into all of those ‘nexts’ with.”