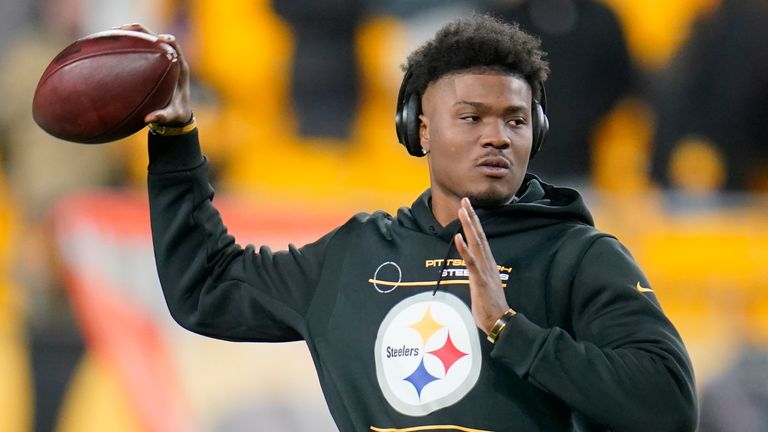 The NFL has lost one of its rising stars. Dwayne Haskins, a quarterback for the Washington Commanders and Pittsburgh Steelers who rose to prominence during his college days at Ohio State, was tragically killed on Saturday, April 9, when he was hit by a truck in South Florida.

He was less than a month from his 25th birthday. Haskins was drafted by the Commanders with the 15th overall pick in 2019 and was preparing to enter his second season with the Steelers.With the news breaking of his sudden death, tributes came pouring from all over. Haskins’ alma mater, Ohio State, honored him on April 16 with a moment of silence, the players and coaching staff all donning “DH” decals and pins and CJ Stroud, the current Buckeyes quarterback, wearing Haskins’ number 7 jersey.

Haskins had a formidable career at Ohio State. Following a redshirt freshman year, he exploded in his sophomore year, completing 40 of 57 passes for 565 yards and four touchdowns. He holds the school record for total offense in a season (4,900+), total offensive yards in a game (477) and total passing yards in a game (470).

Haskins’ teammates, both current and former, and his rivals also mourned his sudden loss.

“Dwayne meant so much to so many people,” said Steelers defensive tackle Cam Heyward.

“His smile was infectious and he was a guy you wanted to be around. We are all in shock about losing him. We are going to miss the heck out of him as well. We lost you way too early. Luckily I got a chance to get to know you.”

He was with the Commanders (originally known as the Redskins) for two seasons, seeing his first win against the Detroit Lions in 2019.

“I am absolutely heartbroken to hear the news of the passing of Dwayne Haskins Jr.,” said Commanders head coach Ron Rivera.

“Dwayne was a talented young man who had a long life ahead of him. This is a very sad time and I am honestly at a loss for words. I know I speak for the rest of the team in saying he will be sorely missed. Our entire team is sending our heartfelt condolences and thoughts and prayers to the Haskins family at this time.”

In 2021, he signed with the Steelers as a third-string quarterback, only seeing action in one game that season.

“When Dwayne first walked into the locker room I could tell he was an upbeat guy. He was always making people smile, never taking life for granted. His impact on me will last forever.”

In the wake of Haskins’ death, a particularly heartbreaking video surfaced. It showed him as a child, touring the Ohio State football complex and proclaiming with joy,

“I’m going to go to college here.”Haskins is a true talent that will be sorely missed.