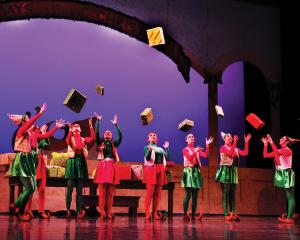 “Tis the Season” was a wonderful mix of what makes the holidays great: winter fun with loved ones, the true meaning of Christian tradition and joyful Christmas cheer.

This production was performed at the Mary D’Angelo Performing Arts Center (PAC) on Saturday and Sunday, Dec. 10 and 11, at 2 and 7 p.m.

There was not one part of the show that bored the audience.

The mix of music, colorful costumes and the dancers’ beautiful movements contributed to the exciting performance.

When asked about how she felt about performing in this concert, senior Juliana Franks said that it was an honor.

“It was a great experience to have been a part of this show. Hearing such positive responses to this new holiday concert is very exciting and flattering,” she said.

While audience members were walking in to the theater, a gospel choir was singing on stage.

The Shiloh Baptist Church provided the first glimpse of holiday spirit and got the audience excited about what they would soon watch.

Assistant Professor of dance Mark Santillano narrated the show, in a rhyme that resembled “Twas the Night before Christmas.”

Many holiday seasonal references were included, which made the audience chuckle with delight.

First on the program was a piece titled “The Skaters,” with music by Giacomo Meyerbeer. This featured the
Mercyhurst Dancers under the direction of Dance Department Chair Tauna Hunter.

The dancers glided around the stage in graceful motions that mimicked skating. They were beautifully costumed, in fur-lined jackets, hats and gloves.

Two couples were featured in each show.

For the Saturday evening and Sunday afternoon performances, Kelsey Chamberlain and Eden Mishler performed the 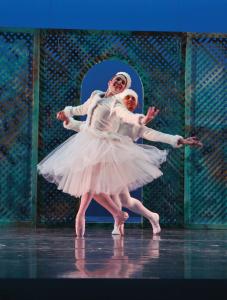 Next on the program, the Liturgical Dance Ensemble premiered a piece titled “A Multitude of Angels,” set to the “Christmas Oratorio” by J.S. Bach.

This was a very powerful number, where it was clear that the dancers were rejoicing.

The stage was decorated in blue light, with a large star of Bethlehem centered as a backdrop.

The dancers were beautifully costumed in flowing blue skirts with just a hint of sparkle. The monochromatic color scheme was simple, yet very sophisticated.

Much of the dance number centered around similar movements. The dancers often moved in unison.

This provided the audience with a very powerful feeling of awe.

There were many short solos in this piece, but the dancer that stood out the most in her solo was junior Tess Sinke.

She moved with elegance and grace, fitting to the music she danced to.

The piece was a beautiful premiere.

It was very nice to see something spiritual performed in a holiday concert, in an elegant way.

For the final performance, the stage was transformed into a scene of the North Pole.

“Santa’s Toy Shop” was a premiere work choreographed by Hunter.

The dance was set to a compilation of Christmas music. Everything from Rodgers and Hammerstein’s “My Favorite Things” to Smith’s and Ray’s “Jing-A-Ling.”

This was a complex act. Each dancer had a specific character to play, and they did so convincingly.

The number started out with an adorable dance consisting of the “elves” of Santa’s Toy Shop.

They tossed presents in the air and danced around cutely with each other.

Next came a short number of floppy, dancing rag-dolls. They rolled and flopped to the tune of “My Favorite

Things,” from Rodgers and Hammerstein’s “The Sound of Music.”

The next number was a tap-dance. Toy soldiers marched onto the stage and moved in very robotic motions.

They danced to “March of the Toy Soldiers,” by Jessel and McDonald, which started very mechanically, but got jazzy towards the end.

They danced together and were accompanied by the rest of the ensemble.

A jazzy, mambo version of “Rudolph the Red-Nosed Reindeer” was next on the program. Senior Victoria Scott led the dance as “Santa,” and used a rope to guide her “reindeer.”

In the “Jing-A-Ling,” the stage became a scene of magical chaos.

Dancers dressed as a giant present and candy canes. This only added to the comedy of the number.
All the elves danced wildly, showing exuberant Christmas cheer.

Junior Matt Tolbert worked backstage for this concert. “It was really cool to watch this from back stage. I loved watching my friends dance like elves,” he said.

“The performance really touched on every major piece of the season,” she said. “I liked that it was so varied.”

“Tis the Season” was a very successful holiday concert. Audiences can only hope that the dance department continues this tradition.