'The Importance of Being Earnest' delights all who attend

When one thinks about late Victorian theatre the response, in these days, is not terribly enthusiastic.

When imagining the Victorian Era, images very often come to mind of an extremely staunch social hierarchy and very little that can be called truly “funny.”

That is, unless one is familiar with the theatrical offerings of Oscar Wilde. 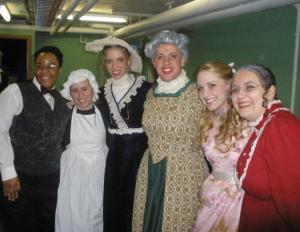 Contributed photo: ‘The Importance of Being Earnest’ featured a tightly-knit cast of Mercyhurst students.

Last weekend, the Mercyhurst community was treated to a fantastic rendition of Wilde’s most famous play, “The Importance of Being Earnest,” acted out in the Taylor Little Theatre.

The play centers around a period in the lives of two young men, Jack Worthing and Algernon Moncrief.

Both seek to be married, but neither can manage to keep their identity perfectly suited to their desires, nor those of their future wives. It is a convoluted and fantastically absurd plot, as well as a triumph of the English language.

Given that many of the jokes in the play are geared towards the audience of Wilde’s time, a time ripe with a different social conflict than we see today, one is, perhaps, surprised that the work was received as well as it was.

This production had the crowd laughing all the way through, both because of the writing itself and the skill of the actors involved.

The play opened with an interestingly anachronous piece of jazz on the piano and moved swiftly forward into the main conflict of the plot.

Junior Matthew Tolbert and sophomore Mathew Anderson, who played Algernon and Jack, respectively, displayed magnificent ability to temper one another throughout the work.

This is not mentioning the other members of the cast, however, all of whom were perfectly suited to their parts. The Lady Bracknell was arch and severe (though curiously played by a man), Cecily was sprightly to the point of being slightly mad and Gwendolyn was grandly composed.

The cast was obviously tightly-knit, which certainly added to the audience’s experience. Anderson said, “My experience in the show was wonderful. I’ve had a constant sense of camaraderie and support from everyone involved.”

The costumes and the use of the few props that are required in the production were both executed brilliantly, as was the choice of music for the production.

Music was used both in the piano at the beginning and the use of “Poor, Wandering One” from Gilbert and Sullivan’s “Pirates of Penzance,” music which had been composed during the time of the play’s production and could, potentially, have been used in the part of the script that calls for a song.

Reaction from the audience was particularly enthusiastic, as opening night ended with a long standing ovation and wonderful commentary from many of the viewers.

“I loved it,” said junior Amanda Stafford, a student who was previously familiar with the play. “I thought that it was all really well done and especially liked all of the side jokes that were put in.”

Even those who never thought they would care for this type of production were impressed. Sophomore Susan Hu said, “I enjoyed it a lot more than I expected. I’m definitely going to read the play now.”

This dramatic performance was incredibly brilliant and showcased the great talent of Mercyhurst students as well as classical authors. One can only hope that there will be more productions of this kind in the future.