It may come as a surprise to some that Mercyhurst University has its own radio station.

Tucked away in the basement of Baldwin Hall, is Mercyhurst’s Jazz FM. It is 88.5 on your FM radio dial, it is home to state-of-the-art broadcasting equipment and it has recently undergone some changes in management. 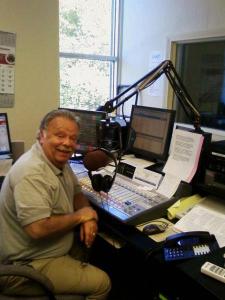 Geary has been in the radio business for 45 years. He was involved in starting the original “Breakfast Club” at Classy 100 in 1987 and served as program director and morning host at Froggy 94.

As the new station manager, Geary has a few plans for the future of Jazz FM.

“This thing is in a state of flux right now,” he said. “I don’t think the students even know about this place.”
Geary hopes to find student volunteers willing to contribute to the station while also learning important communication skills.

“This is a great facility,” he said. “We’d certainly like to have more student involvement.”

Currently there are only three student volunteers working at Jazz Fm. Two of them are the co-hosts of the station’s only student-hosted show “Jazz at the Hurst.” Even so, more student-hosted programming is planned.

Senior David Jakubson currently volunteers at the station writing public service announcements and doing other odd jobs. He also has plans for a show of his own.

“I want to try to put a specialty show together with smooth jazz and maybe some alternative stuff,” Jakubson said.

Geary wants students to be aware that there are more experiences the radio station can offer besides that of being an on-air host.

“Not everyone wants to be on the air,” he said. “Some people can write public service announcements, some can take care of the community bulletin boards and other people can help with the business end of it.”

Other plans the new station manager has for Jazz FM include integrating with the college community more by broadcasting sporting events that take place on campus.

“I’d like to broadcast more sports,” said Geary. “There would be an audience for it in Erie, but I think the bigger audience would be the parents out of town who could listen to their kids competing online with streaming.”

Students interested in volunteering to be a part of Jazz FM can stop by the station and talk to Geary. They can also email him at dgeary@mercyhurst.edu.