'Poetry' tells of a woman who focuses on the positives 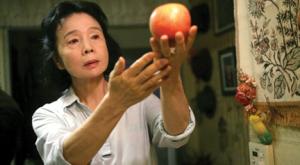 Slantmagazine.com photo: Yang Mija finds beauty in everyday life in the film Poetry.This week, the Maria J. Langer film series is proud to present the Korean film “Poetry,” which is about a woman, who despite the pessimism of the world around her, chooses to focus on only the upbeat aspects of life.

This is the story of Korean grandmother Yang Mija and her journey to find peace and righteousness on Earth. At the age of 66, Yang is living on government welfare and is occupied by taking care of an elderly man.

On top of this, she has been given the task of looking after Wook, her spiteful grandson who helps run her home.
Yang started taking poetry classes at her local community center and at the advice of her instructor, she began to take notes on the things she sees in everyday life. Wook has a close-knit group of friends from school whom he regularly hangs out with.

One evening after one of her poetry classes, Yang meets with the fathers of the other boys in the group only to find out that the group of boys have been regularly raping a girl from their school.

The rapes went on forsix months before the victim committed suicide. After the death of the girl, it is discovered that she kept a diary, and in order to prevent a full investigation, the families proposed to pay a settlement to the affected family.
Regardless of these trials, Yang cannot help but see the positive in all situations, despite the pain and frustration she sees in the lives of others. After visiting the mother of the victim, Yang’s resolve to bring the boys to justice only is strengthened.

The decision to condemn the boys also means that Yang will have to revile her grandson as well.

In the course of the investigation, Yang develops an empathic connection to the victim’s mother rather than perceiving wrong doings as an abstract form of injustice. This notion of justice seems to be the underlying message of the film.
“Poetry” is taking on the challenge of finding a solution to unusual social circumstances, and the response to human tragedy. Throughout the story, Yang attempts to retreat to her artistic note taking on the simple happenings of life around her.

Her innocent attempt to reference her lessons and create some meaning in her life and reflect on beauty is a way to cope with turning in Wook.Yang cannot bear to see the consequences of helping the police arrest her grandson, and by acknowledging something as simple as a tree, she is representing her ability to see beauty in even the lowest of lows.
Remarkably, Yang is the only one in her poetry class to complete a poem.

It is precisely because of her ability to seek out what is beautiful in the mundane that leads her to a deeper understanding of poetry and consequently, what it is to see absolute beauty in the world.