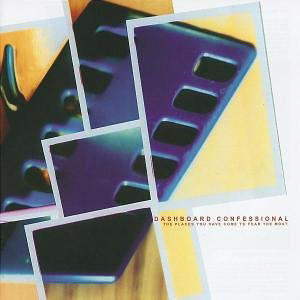 Uulyrics.com photo: Even a decade after being released, &quot;Places&quot; still has the feel of a more recent release.
While Chris Carrabba/Dashboard Confessional has released six studio albums over the years, none arguably have the holistic depth, poetry and emotion “The Places You Have Come to Fear the Most” possesses.

The album is clean off its 10-year anniversary, yet still has the feel of a fresh compilation due to the masterful lyrical command throughout.

Though only a mere 30 minutes long, the album contains a plethora of passion present within the driving force of Carrabba’s voice.

Carrabba is the poster boy for guitar strumming, heart-on-the-sleeve acts.

Although this “emo” identity, synonymous with heartbreak, is a turnoff for some, none can deny the way in which he melds thoughtful lyrics with graceful chord progressions.

The opener, “The Brilliant Dance,” is a classic example. The song is one of paradoxes, as the subject of the song wrestles with the love/hate feelings concurrently existing when a relationship has gone sour: “And the plaster dented from your fist/ In the hall where you had your first kiss/ Reminds you that the memories will fade.”

Likewise, “Screaming Infidelities” is another angst-ridden endeavor bemoaning the cheating ways of a lover.

“Your hair, it’s everywhere/ Screaming infidelities/ And taking its wear” metaphorically shows the painful little reminders of the past relationship. It perfectly captures the difficulty of moving on from the pain and the past.

In fact, the entire album centers around this theme of heartbreak and betrayal. Although each song is brilliant in its own right, “The Best Deceptions,” “Saints and Sailors” and “Again I Go Unnoticed” stand out from the rest.

Even with this being the case, the motif does not wax monotonous as Carrabba reinvents unique ways to present the sentiments.

While the pure emotive and bare sounds and lyrics may not appeal to all, there is something to be gained from “The Places You Have Come to Fear the Most.”

Carrabba’s songwriting is truly poetry set to music—there are few examples better than this showcase of clever artistry.