Science fiction author Terry Bisson entertained Mercyhurst University with his readings as a part of the 10th Annual Literary Festival.

Bisson presented his work at Mercyhurst on Monday.

“Writing is a solitary business, so it is a privilege to be a performance artist every now and then,” Bisson said about being able to speak at the Literary Festival. 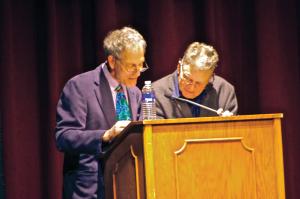 The dialogue was followed by readings from his books “TVA Baby” and “Any Day Now.”

“TVA Baby” is a collection of short stories that Bisson explained is a “string of horrifying events” written comically.
“I was trying to write a horror story with a jolly tone,” he said.

The story from “TVA baby” was received with much laughter from those in attendance.

“When I wasn’t laughing at ‘TVA Baby,’ I was cringing,” Assistant Professor of English Marnie Sullivan, Ph.D., said.
Bisson writes several genres of books but is best known for his science fiction.

In many of his science fiction books, he creates an alternative history. In his recent book “Any Day Now,” Bisson creates a world where Bobby Kennedy was never shot and explains how life would be different.

One audience member asked Bisson what his personal allure was in suspending reality.

“Each story has its own allure,” said Bisson. “There’s a certain suspension of reality in every work of fiction.”

Bisson never read children’s books when he was growing up, but his literary influences are vast.

“He reads books that you would never read in a million years,” Schiff said.

Even so, Bisson does make sure he gets to read novels by other science fictions writers.

“I read other science fiction writers because they’re my friends, they’re my colleagues,” he said.
Sullivan was impressed with Bisson’s presentation.

“Terry Bisson presented an entertaining evening of thought-provoking, artfully uncomfortable prose,” said Sullivan. “He has a finely tuned facility for putting readers in the minds of marginalized or alien characters. There is authenticity—sometimes enlightening, sometimes unsettling—to his characters. Bisson excels at creating believable dialogue and has a great stage presence.”

The Literary Festival will conclude with the release of the Lumen in Taylor Little Theatre on Thursday, April 12, at 8:15 p.m.