The Mary D’Angelo Performing Arts Center (PAC) at Mercyhurst University has a new director of the Institute for Arts and Culture.

Jamie Grady began as the director in mid-March and has big plans for the future of the institute.

Grady was hired to create an arts management bachelor’s degree for the university and will also oversee the booking for the shows at the PAC. 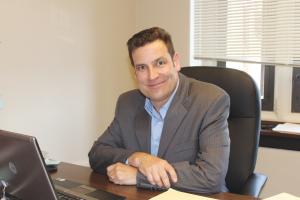 Sarah Hlusko photo: As the new director of the Institute for Arts and Culture, Jamie Grady plans on improving the PAC by increasing student involvement and implementing technology.

He hopes to be teaching the first arts administration class by fall 2012.

“It’ll take time for the process: to submit the proposal and get it approved,” Grady said.

He wants to merge his ideas into the classroom system.

“This way I can get into the classroom and teach kids that would be interested,” he said.

As for booking shows, Grady ideally wants more student involvement and input in order to find shows that will interest students. The goal is for more students to attend events at the PAC and foster a tight-knit college community.

He has a good idea of the way the current college generation communicates and with this knowledge wants to focus on gaining a new audience for the performing arts and art in general at Mercyhurst by using technology to engage audiences.

“I think people in my profession—not all of them, but a good deal—look at the younger generation with a bit of a bewilderment,” said Grady. “They operate differently on two levels: the virtual and the real, and it’s fascinating.”

Grady hopes to find a balance between the technology generation and the PAC’s traditional audience.

“I think because of that on-off real/virtual reality, the older generation doesn’t recognize how many different ways we are in fact connected,” Grady said.

He hopes to gives students “the participation they desire through that outlet” and “to see the performing arts come to life in that respect.”

Grady comes to Mercyhurst with much experience gained through 12 years in nonprofit theater management and 12 years in academia as a professor. He has worked in New Zealand as a fundraising manager for the New Zealand Symphony Orchestra and also at Point Park University, where he taught arts and entertainment public relations and performing arts management.

Having worked for numerous theaters over the years, Grady knows what it takes to expand ideas and engage different audiences. Primarily, he wants to take advantage of social networking to revamp the image of the department and promote shows to bring in a wider audience.

“It fits into everything I’ve been doing, working as a professor for 10 years and theatre companies,” he said.

Some of his future goals are to work “with the dance and music programs to help better advertise and integrate together into regular performances” and to “have students side by side with these world class performers,” he said.

“I would love to hear if any students have interest in this,” Grady said.

Students who are interested can email Grady at jgrady@mercyhurst.edu.

Shea Quadri contributed to this article.