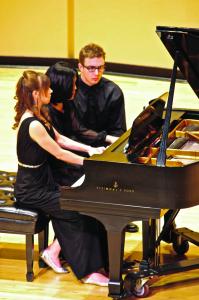 Zach Dorsch photo: Senior Kelton Macke performs a piece with Shirley Yoo, Ph.D., during Thursday’s faculty recital.Audiences were stunned by a display of great musical skill and virtuosity on the stage of “A Celebration of Collaboration,” on Thursday, April 12. This presentation and works were performed by faculty and students alike.

The performance showcased a variety of musical instruments ranging from violins and violas, to a single piano played by two musicians.

The opening presentation was of a brilliant string duet for violin and viola, composed by Georg Fredrich Handel. Johan Halvorsen wrote this particular arrangement of “Passacaglia.”

This composition is a lively, up-tempo piece that was performed by Mercyhurst University’s own Assistant Professor of Strings Barton Samuel Rotberg, D.M.A., on the viola and sophomore Caryn Moore on the violin.

In this piece the melody often switched from player to player and required total concentration and precision, which I believe was executed beautifully.

After the string duet, seniors Shannon Carson and Rebecca Wunch performed a presentation of Gordon Lewin’s “View of the Blues.”

This clarinet duet featured that classic blues sound that most jazz musicians cannot get enough of.

It was a great contrast to the piece that came before it. This piece was executed wonderfully and seemed to give the whole room a mellow, phlegmatic feel that you couldn’t get enough of. Throughout this composition, fingers snapped in time and heads bobbed until the last few notes rang from the clarinets.

The next musical presentation was a performance titled “A little Light Music” by composer Seymour Barab. It featured Mercyhurst Post-Bacc. Lynn Dula for the vocals, Rotberg on violin, with the music department chairwoman Louisa Jonason for the piano accompaniment.

Within this vignette were two separate, but equally amusing comedic songs. The first was “Infallible System,” which told the story of a woman who amassed a “small fortune” while gambling. This story is amusing because the punch line of the story is “in order to come out with a small fortune, you must walk in with a large one.”

In the second piece, “Why Johnny Hates School,” Dula told the story of a mother desperately attempting to coax her son to go to school.

After naming numerous reasons why he hates school, Johnny claims that he will go if his mother can come up with just one good reason. She does and says to her son in a calm voice that he must go to school because he’s the principal.

When asked about her overall experience being a part of this recital, Dula said, “As a performer, it was a great experience to have the opportunity to collaborate with faculty members. Their experience and high level of skill pushed me to be an even better musician and performer.”

Assistant Professor of Piano Shirley Yoo, Ph.D., and senior Kelton Macke performed the next set of pieces by Johannes Brahms. The pieces that were performed were No. 6 in D flat, No 7. In A major and No. 5 in F sharp minor of Brahms’s Hungarian Dances. The astounding aspect of this performance was that these pieces were performed by two pianists on one piano.

The compositions were specifically written for four hands on one piano, and the coordination was astonishing.
When listening to this performance, not one place could be noted where they got out of sync with each other.

It was truly a masterful display of what two people could do with a piano and a monstrous proficiency of the keys.
Senior Marie Karbacka said, “I loved the Hungarian Dances by Brahms for four hands. It really highlighted the collaboration idea between student and teacher.”

Afterward, an equally stunning display of virtuosity on the piano was played by freshman Andrija Andjelić, who played “Scherzo in B flat minor,” Frederic Chopin’s second of four Scherzi.
This was a delightful, dreamy piece of music that seemed to float like clouds from the piano in the middle of the stage.

Composed with dramatic rising and falling scales and beautiful lyrical themes, it almost seemed familiar without ever hearing it beforehand.

Associate Professor of Saxophone and Music Education Scott Meier, Ph.D., and senior Erin Hepler were featured as the last two performers for the evening. The saxophone duo played “Suite en Duo” by Guy Lacour, who was a French composer that performed professionally with classical and pop groups.

This act contained three movements: “Allegro,” “Aria” and Petite Fugue. All three were a magnificent displays of musicianship and technical skill.

Overall, the concert was outstanding. Sophomore Kathleen Reveille, when asked about her experience at the recital hall, said, “I loved seeing the collaborations of students and faculty.”