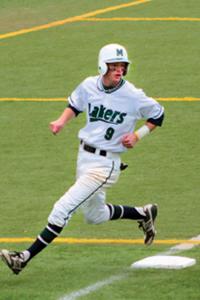 Jill Barrile photo: Freshman Kolin McMillen has been a pleasant surprise for the Lakers. He leads the team in batting average in his first year.When a team has a successful season, is it fair to compare the next year’s team to it?

This is a question the Mercyhurst baseball team has been dealing with during the 2012 season. The team is 28-11, compared to the 42-12 campaign a year ago. Coincidentally, last season was also the best in program history.

The 2012 team has dealt with the comparisons well and is ranked third in the most recent Atlantic Regional rankings. The Lakers returned a number of key players from last year’s squad, but it isn’t the same according to Coach Joe Spano.

“Each team is unique, but we have new faces especially on offense,” said Spano. “We have less experience offensively, and it’s completely different.”

The Lakers are getting key contributions from freshmen as they have had to step in at some point this season.

Freshman Kolin McMillen leads the team in batting average with .389 and is third on the team in hits. This type of production is certainly welcomed especially when more experienced players graduate or go down because of an injury.

“When you recruit a player you never expect that type of production, but you certainly hope for it,” said Spano. “It’s always a pleasure when you hit on a recruit.”

With the loss of redshirt junior Zak Blair, Spano had to adjust his lineup with younger players taking on bigger roles. The Lakers haven’t skipped a beat. Three of the seven Lakers hitting over .300 are freshmen.

The one luxury Spano had coming into the year was a pitching staff that was relatively unchanged. Spano returned six key members of the staff and had high hopes for them.

“I thought it could be an excellent staff,” said Spano. “Offensively, we need to take the pressure off of them.”

Junior Ben Rawding has a spotless 7-0 record with a 2.51 ERA. Rawding, along with senior Eric Aschley, gives Spano two aces to work with. Rawding and Aschley combine for seven of the team’s 10 complete games.

Seniors Shane Latshaw and Ethan Santora have been helping keep some of the pressure off the pitchers. Latshaw was named Pennsylvania State Athletic Association (PSAC) player of the week this past week and leads the team in home runs and is second in RBIs.

Santora has had a down year to his standards, but he set the bar very high for himself. As a freshman he hit 16 home runs and recently broke the school’s career home run record.

“He will never sit out; he hurt his hand early in the season and has been really impressive,” said Spano. “Every record he breaks he gets a bigger bull’s-eye on his back.”

With Latshaw’s emergence, Santora has protection in the line-up, and they are both tough outs for opposing pitchers. So far, they have been just that.

The team still has its sights set on another PSAC west championship this season. The Lakers are in first place but only after a tie-breaker. Six teams still have a shot at the top seed, and no spot is secure.

“We won’t know until the last week of the season, but we can only control our end,” Spano said.

The Lakers have a busy few weeks ahead as their last eight games are four double-headers. In fact, the team’s next home game is a double-header against Clarion on Friday, April 20, starting at 1 p.m.