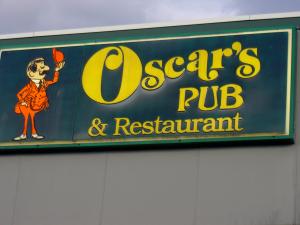 If you wish to experience Oktoberfest but are not able to travel to Munich for the celebrations, then journey to Oscar’s Pub at West 12th Street and Pittsburgh Avenue.

Traveling by car to Oscar’s only took my friends and me 15 minutes from the Mercyhurst College campus. For a Saturday evening, the restaurant was not overly crowded, and we were immediately seated at a booth.

Our server waited on us as soon as we arrived and gave us a list of beers on tap. Oscar’s is renowned for its 20 draft and 60 import and micro-brewed beers. We settled on water, which was delivered to us in small, cute, glass jam jars.

After too much deliberation, I followed my craving for carbohydrates and ordered the Filet Croissant (Photo 1), a sliced tenderloin steak grilled and served on a croissant with melted provolone. For a side, I had a choice of cole slaw, cottage cheese, homemade chips or potato fries. Priced at $7.95, the croissant and potato fries fit within my budget.

Since we are poor college students, my friends also ordered sandwiches because they were in our price range. A bratwurst hoagie (Photo 2) with sauerkraut and side was priced at $6.50 and a mushroom burger and side was $7.10.

As the night progressed, Oscar’s became more crowded with an adult demographic. However, the additional customers did not affect the delivery of our food because it arrived within 15 minutes.

Though flaky and buttery, my croissant engulfed the tiny steak filet hidden inside. I have to admit, I was somewhat disappointed in the size of the filet. However, the thick-cut potato fries left me full and satisfied. Talking with my friends, we all decided I probably did not make the best selection because they were very satisfied with their meals.

My friend said the bratwurst and homemade potato chips were delicious, though the large size of the meal was too much for her to finish. Also satisfied, my other friend ate all of his mushroom burger and fries (Photo 3).

After we finished eating, we were promptly given our bills. I paid with a credit card and my friend paid with cash. Our server took our payments and then disappeared for 15 minutes. I began to worry that she took my credit card for a rendezvous to the nearby strip mall, but my worries were soon forgotten when a Viking man dressed in fairy-wings and tights entered Oscar’s bearing a batch of “Happy 50th Birthday” balloons. He proceeded to sing a “Happy Birthday” Viking tune to a small party near our booth.

Laughing hysterically and photographing the occasion, the birthday party seemed pleasantly amused. My friends and I could not help but be entertained as well.

Eventually, our server returned and apologized for the long wait. We left soon afterwards even though I was tempted to snag a photo with our Viking friend.

Overall, I can say my experience at Oscar’s will always be a memorable one since I viewed an actual holiday gram in action. 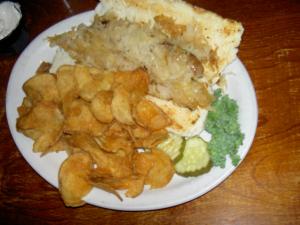 Oscar’s burger with mushrooms and fries

Oscar’s Pub & Restaurant is on the corner of West 12th Street and Pittsburgh Avenue.