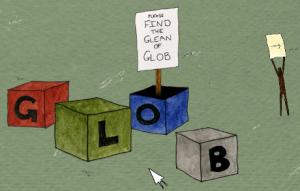 “The Glean of Glob” appears to be themed after Dali’s art.

Pros: Surreal (if that is what you are into), free, heavily art influenced

Cons: Is more art than game, a onetime play

If Salvador Dali had ever created a game, The Glean of Glob would be it.

The Glean of Glob can be found at http://jayisgames.com/games/the-glean-of-glob/. This is a very surreal game. It has all the basic weirdness that can be expected from a surreal work of art. From heads that release birds and attack balloons to flaming eyeballs, this is just one strange game.

The game is a basic point-and-click game. You keep clicking until something happens, then you go from there. For impatient players, this game can become frustrating since it is not fast-paced.

This game spends most of its time being art rather than a game, except that the art is interactive. Players make art happen by figuring out the puzzles the game presents. With each puzzle solved a little more of the art work is revealed. The art work then changes with each solved piece.

Once players reach the end of the game, the whole art piece is revealed but has changed yet again since your last solved piece. (I have no intention of telling you how the game ends). However, if you are not an artsy person, then this is a drawback. If you are looking for a really engaging game that has you on the edge of your seat, then this not the game for you.

I gave this game only two stars out of five because it is less game than it is art. I do think everyone should play this game at least once, knowing to expect great graphics. As art, this is very interesting (coming from a person whose favorite artist is Salvador Dali) but as a game, it is very uninteresting, and I am here to review games, not art.

If you disagree with me, want to talk with me, or meet other people who are interested in games, go to Mercyhurst Game Geeks on facebook.com.