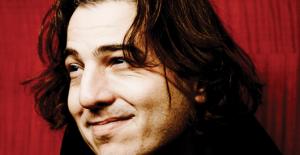 pac.mercyhurst.edu photo: World Famous pianist Fazil Say shows his virtuosity on the piano for audiences in the Performing Arts Center
There is something to be said for eccentricity, in all its forms. There are instances in which it seems inappropriate, and times when it is used for the sake of being different. More often, however when presented to and audience, it charms and interests.

This latter point was certainly the case at the magnificent piano performance given by Fazil Say at the D’Angelo Performing Arts Center on Thursday, April 19.

Fazil Say is a Turkish pianist and composer with an impressive appearance on paper. His great credentials include such things as performing with the St. Petersburg Philharmonic and the Tokyo Symphony.

During his time visiting the United States, Say only had two performances, one of which we were fortunate enough to have in Erie.

The stage at the beginning of the evening was set with pink and blue lights providing a bright background of color to the shining black piano before them. Say made an impression from the moment he walked out on stage; with the velvet coat and long hair, one could very easily make a comparison to Oscar Wilde, appearance-wise.

The first movement of the first piece, a Piano Sonata by Leos Janacek, began in a pensive, languorous manner with rolling chords and what seemed to be pining sustains, followed by an anguished, weeping dissonance.

It eventually came to a blissful major repose—a welcome rest after the tension of the remainder of the piece. This first work also introduced listeners to some of the curious idiosyncrasies of Say, which included varied techniques such as humming and making long, languid gestures at the keyboard as if to emphasize the poignancy of his phrases.

He seemed to be asking rather than telling the piano to sing for him, and it worked very well, aesthetically, though one has to wonder what the artist’s intention was in doing such things to begin with.

The second movement of Janacek’s piece began with ironic delicacy for something called “Death,” but quickly crashed into a fiery dissonance, as though the subject is beginning to fight for life, but can do no more than be afraid in life.

It eventually returned to a sort of lonely felicity before it closed, much like the prior movement. The second piece on the program—Piano Sonata No. 7 in B flat Major, by Sergei Prokofiev—continued the theme of the first piece, in that there was a great deal of dissonance and tumultuous emotion.

This carried on to the second half of the program, as well, with Say’s original works, and seemed to be an overarching theme that was played throughout the night. In each, there was a loud, atonal catharsis at some point, and emotions shifting passionately from one to the next with breathtaking precision.

There was something more jocular in this piece, overall, however, which dwelt in the realm of brighter feelings that one doesn’t often hear in atonality type music. The second half of the program featured Say’s original works, all of which were very interesting, and which included myriad influences, from jazz to what sounded much like popular music.

Freshman Rachel Masters said she “really liked the second half; the pieces he composed were the best.”
Indeed, Say was right to perform these last, as they evoked a clear emotional reaction from the audience.

During this part of the performance, Say pulled out an extended playing technique with the piano, in which he placed his fingers on the strings and played the notes at the same time, forcing the piano to sound even more like a tuned percussive instrument than it already does. Although he used extended technique a great deal throughout his pieces, it did add a certain depth of interest that may not have otherwise been present.

The last of the works he played that was listed, Istanbul, was especially moving, for its use of winding harmonic minor melodies and pensive tempo. To call the reaction of the audience “appreciative” would be akin to calling water wet: It describes a quality, but it doesn’t do it real justice, nor evoke the feelings that first-hand experience provides.

The audience was thrilled to a first standing ovation, after which it was rewarded with an encore; a second standing ovation prompted a second encore, and the audience likely would have remained requesting more as long as they could, had it not been rather late by that point.

Students were excited by Say’s performance. Freshman Matt Bourne said that Say was “very eccentric,” and his playing “extremely skillful.”

Professors as well as students were thrilled by Say’s performance.

Nathan Barber, adjunct instructor in the Mercyhurst music department, said, “Having only heard him as a recording artist, it was magnificent to witness him as a performing artist. I thought it was a treat, and something I needed.”

While Say was undoubtedly very interesting, there were those that found something a bit outlandish about his eccentricity.

“I thought he was a talented performer, but some of his techniques were over the top. His feet sounded and looked like I was watching a racehorse,” said sophomore Katie Kaiser.

Whatever one thought about Say’s undoubtedly different manner of playing, one can say that he made brilliantly beautiful music and one can only hope that Mercyhurst will have such great musicians as him perform again.