Mercyhurst University senior Victoria Scott has always dreamed of becoming a Rockette, and she is now one step closer to making her dream a reality.

Scott is a senior dance major with a concentration in performance and business administration minor.

“When I was little I used to compete, and I actually performed to a song called, ‘I Wanna Be A Rockette.’ I didn’t think I was going to be tall enough, but thankfully, I grew,” Scott said. 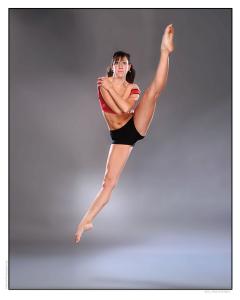 Her mother was the person who put her into dance classes, and Scott quickly began to fall in love with the art.

As for Scott’s Mercyhurst support, Noelle Partusch, associate professor of dance, was one of her professors who strongly influenced her in dance.

“She and the rest of the department have always been extremely supportive of me,” Scott said. “I had to drop the spring performance to be able to go to the Rockette audition, and I was fully supported by the department in my decision.”

Many dancers dream of the chance to become a Rockette, and Scott decided to work toward her goal. She submitted to a contest called Jump the Line that she found through Twitter and Facebook. The contest required contestants to submit a video less than three minutes long of them dancing to jazz, ballet and tap.

It was deadline day and Scott decided she had nothing to lose by entering the contest. She threw together the video that day and started to have difficulties uploading the video. She was able to submit her video at 11:45 p.m. with 15 minutes to spare.

“It was such an on-the-whim thing, so when I found out I was in the top 10 I was shocked,” Scott said.

Hundreds of women applied for the contest, and Scott actually made it to the top five, but they found a glitch in the system and allowed all 10 girls to come to New York City. The contest is flying each woman there, providing hotel accommodations and allowing the women to jump the line for auditions.

One of the benefits of being one of the winners of the contest is that Scott does not have to wake up early to stand in line for auditions. The line will start outside Radio City Musical Hall, and there will be roughly 500 women waiting to audition to be a Rockette.

Scott will be one of the first to audition that day in front of the director of the Rockettes. Another advantage of submitting her video to the contest is the director has already seen Scott dance and was the person who chose her video to be placed in the top 10.

Each year the number of dancers selected to be a Rockette varies. There are about 40 Rockettes, so spots are determined on retirement of cast members.

Scott will fly to New York City on Wednesday, May 2, and her auditions to become a Rockette are on Thursday, May 3.