This year Mercyhurst University came together and made Relay for Life a success. With this being the first year to attempt the full 24 hours of walking, Mercyhurst surpassed its goal of raising $25,000 with a grand total of $25,743.

There were 37 teams to sign up for the walk including teams from Mercyhurst North East. Each team provided a table that included an activity to raise awareness and earn money for cancer research.

“It was great to see the school come together. I hope to see the walk grow even bigger next year,” junior Emily Iabone said.

Some of the table activities included Pie a Professor, a hand print board for everyone who donated for the event, Cheer for the Cure bows and raffles. 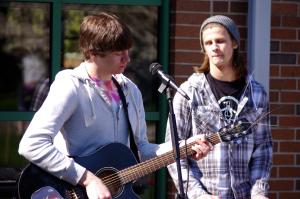 Throughout the event, The Romantic Era, senior Angelina Smith and Heather Donovan and alum Mike Show performed for those involved.

The event began with the singing of the national anthem. Preceding the anthem, Relay for Life chair Melora Whalen and co-chair Jennie Politano spoke about Relay’s beginnings and how the event has progressed over the years.

“The goal is to get people really pumped up to start walking,” Politano said.

TJ the DJ got the crowd moving with some music, and the color guard led everyone around for the first lap of the day.

There was a different theme for the laps each hour. These included a water balloon lap, where participants had to walk around the track with a balloon between their legs. Another included a three-legged race, where winners won passes for a free game of bowling.

Other themed laps consisted of faculty versus administration and another when glow sticks were passed out around the track.

“Relay for Life was a great experience. I had a great time, and everyone raised a lot of money for a great cause,” junior Lindsay Ogden said.

A new addition to the walk this year was the release of paper lanterns into the night at the Luminaria ceremony. The lanterns were lit and slowly released, illuminating the sky.

“We thought this was a really good way to remember the ones we have lost and something that is more interactive. Everyone really seemed to enjoy setting them off and watching them as they slowly blew away,” Politano said.

The ceremony was then followed with a walk of silence to honor those who have had to endure the experience of cancer interfering with their lives and those who were lost to the disease.

Whalen and Politano worked hard in preparation for the walk. They made sure everything went smoothly including set up, organizing the supervisor dinner, food preparation and making sure everyone fulfilled their duties.

“We have to be authoritative and remain a fun, yet safe environment for all the participants. Overall, it’s a lot of running around,” Politano said.

Everyone has their own reasons for getting involved with Relay for Life. Some have been personally affected and others just feel the need to help a wonderful cause.

Politano had her own personal reasons.

“I first became involved with Relay for Life because my grandmother and great-grandmother both passed away from cancer,” she said.

Relay for Life is an event that motivates Politano each year.

“The reason why I continue to be involved is from learning about cancer and how it affects so many people around us.

“Students that attend or had once attended Mercyhurst really hits home with me. We are still so young and have so much to experience; everyone should have the freedom to live,” she said.

Despite the cold weather, everyone stuck it out and continued the event all night. A bonfire was started to keep walkers warm, and many stayed the night in tents.

Politano encourages students to email her with comments or suggestions regarding the event at jpolit82@lakers.mercyhurst.edu.