Voice students give weekend of recitals 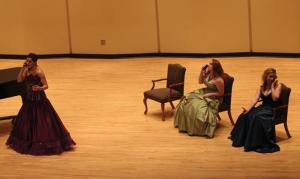 Sarah Hlusko photo: Voice students work diligently for months to prepare their repertoire for the recitals given at the end of their junior and senior years.
Over the course of this past weekend, Walker Recital Hall was ripe with talent that would drop any jaw. The four recitals featured extensive repertoire, beautiful dresses and five sopranos, along with one baritone.

Senior Brianna Steves gave the first recital along with her accompanist, Andrew Rainbow. Steves commanded the stage with a stunning, classic black dress.

Steves opened the performance with three selections in Italian. First, was the well-known piece “Pieta Signore,” composed by Allesandro Stradella. Its long melodic lines joined with Steves’ wonderful voice instantly charmed the audience. It rang clear as a bell through every note she sang.

Whether it is a long legato melody, or short staccato trills with challenging note jumps, Steves made it seem as though it was as easy as picking flowers.The next section of music was completely in German and all by late Romantic composer Gustav Mahler.

This section was extremely bright and airy, and gave the listener a sense of happiness, which almost forced them to smile. The same could be said for the following selections in Italian, which were equally pleasant to listen to.

The two pieces by well-known composer Wolfgang A. Mozart followed.

The link between these two pieces is the composer because unlike the previous sections, this one featured two separate languages. One was sung fluently in Italian and the other boldly in German. Both renditions were stunning shows of vocalist virtuosity on Steves’ part. The latter of the two, “Bester Jungling,” featured a difficult melismatic pattern toward the end of the piece, and Steves not only made it look effortless, but also did so with flying colors.

After a short intermission, Steves again took the stage and presented works by George Frederick Handel, French composer Henri Duparc and Eva Dell’ Acque. The recital concluded with a little comedic relief. Gian Carlo Menotti’s “The Telephone Aria” is sung exactly how it sounds: on the telephone.

The second and equally stunning performance was the recital of “The Three Sopranos.” This recital consisted of a collaborative effort of seniors Kirstan Orgel, Alianna Whiteaker and Sara Maitland. Accompanying the three were adjunct faculty members Ruth Ann Scanzillo and Faith Lifshen on piano. Starting off the concert were three works by George Frederick Handel, each performed by a different vocalist.

Each soprano gave a stunning display of virtuosity and started the program energetically. The third work in this section was sung by Orgel and was also accompanied by Chris Wise on trumpet.After that another rendition of “Pieta Signore” by Stradella, much like the performance we heard the day before, it was a wonderful display of the capabilities and talents of Mercyhurst’s music students.

The third section of the program was completely in German. The diction of these pieces was incredible.
After intermission, the three women presented amazing displays of vocal talent. This last half of the recital included Bellini’s “Ah! Non Credea Mirarti,” Debussy’s “Beau Soir” and Saint-Saens’ “Aimons-Nous et Dormans.”

The recital concluded with three English arias by Floyd, Moore and Menotti. The three women brought forth a stunning recital that showed their brilliance and proficiency with all their music.

There were also stunning vocal performances from senior Elizabeth Zurasky and junior William Pertransky. Both vocalists commanded the stage and left their audiences wanting more.

This past weekend was a great representation of the absolutely stunning caliber of Mercyhurst’s music department.