When residence life is called in to deal with an animal on campus, the presumption is that the critter will be cute and furry. Never would anyone expect to find an alligator in an apartment at the bottom of Briggs Avenue.

Students on campus risk a $50 fine, 10 hours of community service, social probation, restitution, and possible removal from housing. Each day they open the door, lift the blinds or allow a cracked window to betray the scent, they’re facing possibilities of getting caught. And for what? 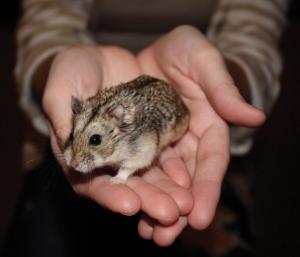 Many students grow up with animals in their homes to bring silent comfort and companionship. At college, stress is full blown and a noiseless rabbit or a cuddling dog remains popular despite the forbidding student handbook.

This handbook reads, “With the exception of guide dogs or bona fide service animals and fish in aquariums with a combined capacity of 10 gallons or less, no pets are allowed in campus housing.”

Naming a fish a “pet” is quite a stretch given its lifespan, attention span and non-existent rating on ability to cuddle. Stressed students want what fish or roommates can’t give, unquestioning love and comfort.

With permission from roommates and Residence Life, one may have their pet visit for 48 hours, but has anyone ever put a cat in a crate for a car ride and the poor thing didn’t think it was about to get a shot?

Students in every residency are outweighing the benefits over the risks by keeping their companion at their side.

Mary Green (not her real name) bought a Siberian dwarf hamster two years ago at the Millcreek Mall pet store and has embraced its company ever since.

“It was quite the impulsive decision,” she says, “but I figured he wasn’t high maintenance.”

Green has had animals before and not having any of them at college was too big of a change. When impulses had her grabbing her wallet, she decided a hamster would be best for the university setting.

Better perhaps, than a 2-foot alligator. Tim Silver took in the scaly roommate when the friend who owned him was preparing to go overseas. They kept him in an aquarium type tank with a filtration system and a heat lamp.

Alice Agnew, director of Residence Life, recalls when the alligator was discovered.

“(The area directors) were searching, and they found the cage that would have held it. I believe then (the student) brought out the alligator and showed everyone,” she said.

“He was fun to have around. It made for a conversation piece I guess,” Silver says.

“The cats and dogs aren’t the animals that throw me, it’s the alligator and the pet spider… I don’t personally understand it,” Agnew says.

The alligator soon left campus grounds for good, but other, less dangerous animals, have escaped notice.

Hannah Gold enjoyed the company of small pets. She kept two Roborovski hamsters in her apartment for a month until her graduation last year.

Seniors like Bobby Blue are planning their careers, living arrangements and along with that, their living companion. Blue says he knew the illegality of pets on campus but decided to take the risk due to his upcoming graduation and buy himself a dog.

“I’ve always wanted one and was planning on getting one after school, so I got one a bit early,” he says.

Blue is confident about maintaining this secret from Residence Life and Police and Safety. In hiding the playful pup, Blue says “not much” was done apart from hiding him during tri-annual health and safety inspections.

Mercyhurst has already recognized the calming effects animals can have on students. Just last year the counseling center started training their new therapy puppy, Bailey, a cheerful hypo-allergenic dog that makes its way around campus getting as much human contact as possible.

“Dog days” occur every now and then in Garvey Park to remind homesick students of their distant pets, and to counteract the works of obvious seasonal depression due to Erie’s lake-effect snow.

There are, however, several arguments non-pet-friendly colleges like Mercyhurst make in order to ensure healthy living for all.

“It certainly induces damage in the apartments. Cats and dogs especially. Anytime we’ve ever had them they certainly leave signs that they have been there,” Agnew says.

“It’s also a lot for other residents; your roommate could be allergic or someone next door or even someone that we move in next year. And it is a bit for safety and for the cleanliness aspect,” she says.

Allergies, quiet hours and property damage are issues that involve the whole dorm.

Cat hair can find its way anywhere with wind, loud barking can disrupt studying students and damage in campus buildings can result in financial responsibilities for all residents. For the school, it’s easiest to have students keep the pets at home and wait for a more permanent settlement before investing in an animal.

The living creature is another concern. Questions such as neglect and budgeting come up when considering the busy–and let’s face it–poor life of college students.

Green knew of the responsibility she would be assuming and of the possible dangers with budgeting.

“I took into consideration how much it would cost up front to buy the pet, cage, food and bedding, and also the fact that we aren’t allowed to have pets on campus.” But she says her roommates are mostly accepting and he is too “cute and tiny” to give up.

About her rodent friends, Gold says, “Hamsters don’t require much time or attention, so time wasn’t a problem. They also don’t require much food or bedding and my roommates helped me out with that, so money wasn’t an issue either.”

As for Silver, mice, raw chicken and crickets aren’t as expensive as you would think; the trouble was not getting your hand bitten.

Blue says he’s had absolutely no trouble providing for his dog on his college budget. With draft beers being only 25 cents in many bars once a week, it’s hard to argue that you don’t save money on the stereotypical stuff.

Agnew warns that “neglect is certainly an underlining concern” and that students may not be aware of how much they can take on.

Blue admits that before making the decision to care for a pet, he wondered if he could afford it and if he would have enough time to take care of it.

With his master’s busy schedule, Blue’s English bulldog needs constant training and supervision. Attending classes, athletic practice and work-study, students may not give the attention animals need even with help from roommates.

In another case, Alan Red found more work than he expected with the rabbit he surprised his roommates with.
Red has had fish before, knowing that was the only exception on campus, but “fish are for dentist offices” he says. “I wanted a real pet.”

The excessive cleaning, the extra mouth to feed and the battle with space was a lot to take on. The rabbit couldn’t get the care it needed from this (at the time) sophomore, and Red gave him away after three weeks.

Eventually he settled on a legal yet “still exciting” pet: a piranha.

Neglect could become an issue when a student is focused hard on academics, but slipping grades can occur if the former is a higher priority.

Blue says that his academics were interrupted “a little bit the first week, but once (the dog) got used to the surroundings it was fine.”

Green’s hamster hasn’t disrupted her studies at all, but rather it makes her much happier each day.

Even a pet the size of one’s hand can make the day much brighter knowing that it relies on you to live and looks forward to your return every day.

Green laughs recalling times her hamster made her grin.

“One time, my friend drunkenly dropped him because he pooped in his hand,” she chuckles. “Another time, I put him on my roommate’s textbook and when she came back she freaked out because she hates him.”

Gold recalls when one of her hamsters escaped in her room and found herself scared yet laughing all at once.

“It made my life easier having them there because they were like comic relief for me. It was also nice to have something to take care of,” she says.

Blue says it is “extremely” uplifting having an animal companion around. Since taking the risk, he says his life is “much easier. My dog has made a lot of people happy, and people come by to play with him everyday and ask to babysit whenever I need.”

“A dog can make people happy just by being around,” he says, “I always hear stories about college students being depressed, especially during Erie winter, and a pet can help people who feel down.”

As far as changes are concerned in the pet policy on campus, Agnew sees no future change.

“We’ve had conversations with our counseling center about support animals versus service animals. We’ve said no to support animals because starting to allow them means you open up a lot of doors and none of our offices or anyone else that we’ve talked to feels comfortable with opening that door,” she says.