Breckenridge takes intelligence on the road

Though the year has just begun, James Breckenridge, Ph.D., executive director of the Institute for Intelligence Studies at Mercyhurst University, has been busy receiving honors and invitations to be present at events in the intelligence community, including upcoming speaking opportunities in Romania, Ireland and Washington, D.C.

Breckenridge is a retired army officer with over 22 years of experience in a variety of operations involving intelligence and teaching assignments. He has served as a professor of military science, a targeting intelligence instructor and is a former faculty member in the history department at West Point. 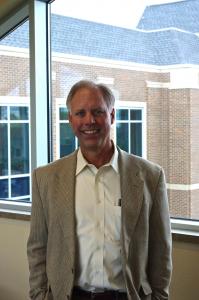 In addition to his administrative and teaching duties, Breckenridge teaches courses in Intelligence methods for the Department of Defense and the U.S. Department of State.
In October, he will travel to Bucharest, Romania, to chair a panel discussion at the International Conference on Intelligence in the Knowledge Society.

This year’s theme is “Toward a Science of Intelligence at the Beginning of the 3rd Millennium.”

Breckenridge said that at this conference “there is a debate between whether or not intelligence is an art or a science. Here at Mercyhurst we teach both the sciences and the arts, but this conference focuses on the science aspect, and it’s my job to keep the debate going.”

In November, he will speak on international collaboration and information sharing at the Trans-Atlantic Cyber Security Summit in Dublin, Ireland.

In December, Breckenridge will speak to over 300 police chiefs, special agents in charge, U.S. attorneys, sheriffs and other law enforcement leaders who are part of the High Intensity Drug Trafficking Areas (HIDTA) program.

He will be discussing the application of Intelligence in the national security and law enforcement sectors of intelligence.

Mercyhurst’s Intelligence Studies Institute has been heavily involved in supporting the agency’s efforts since 2008 when it undertook a $250,000 study for the Office of National Drug Policy to examine how HIDTA offices use Intelligence around the nation.

It is because of this relationship Breckenridge said, “That this conference is a great opportunity to see old friends, but to also make new ones, because it gets the university name out there, and it helps to make connections for our students.”

Sophomore Jacob Middlesetter said, “I think it is great. One of the things that was made obvious from day one, was that Intelligence analysts are a necessary commodity, and there is a desperate need for them in every part of the professional world.”

For the Intelligence Studies majors Breckenridge did caution that, “We should expect at the beginning of next year right off the bat a cut in national security field, but an increased opportunity in the Competitive Intelligence field.”

As for his favorite part about having the opportunity to speak at such conferences Breckenridge said, “I like to travel, and I really love meeting new people and telling them all about our program and what the students do here at Mercyhurst in the department.”