Walking into the Egan dining hall has the potential to be yet another meaningless social interaction, one of hundreds throughout the day. Yet between the hours of 7 a.m. and 2:30 p.m., students are greeted by someone much different. 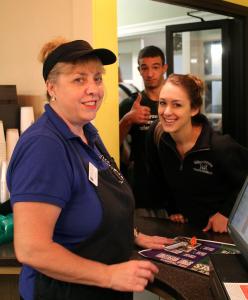 A woman with a Facebook fan page, a beaming smile and more comment cards adorning the wall boasting her name than any other: It is Rhonda Blount that makes all the difference.

Quite the celebrity on campus, Rhonda has been a fixture at the Egan dining hall for four years, greeting students, swiping ID cards and manning the coffee bar as students enter. Rhonda’s smile and cheery disposition make students from all walks of life feel welcome on campus, a feeling Rhonda strives to instill in those she encounters.

“They are all away from home, everything is so new – how could I not be nice?” Rhonda said, with her trademark smile and a chuckle as she described what she liked best about her job.

Being far away from home, like many students are when they come to Mercyhurst, is not an unfamiliar feeling for Rhonda.

Born and raised in a small town in Maine, Rhonda “hopped a Greyhound bus and took off for California” at age 18 with two of her closest friends.

Recalling her days in Ventura, California, with a smile, Rhonda described her time working on the West Coast, saying that she may be a bit of a “reformed rebel.”

Her sense of humor and personality shining, she described her time working far from home where she eventually met her husband. This period of her life she jokingly described as “back in B.C. – before children.”

After the birth of their second son, Rhonda and her husband moved back East to be closer to family, settling in Erie, Pa.

When asked what she liked best about Erie, Rhonda expressed her love of the outdoors, saying that she spends much of her time enjoying nature.

Whether enjoying the beaches of Presque Isle, kayaking with her girlfriends or camping with her husband and two sons, Rhonda leads an active lifestyle when not on campus.

When she explained her life outside of Mercyworld, Rhonda’s face lit up when talking about her fondness for kayaking, even describing an annual kayaking trip she takes down the Allegheny River every June.

Besides her active lifestyle, Rhonda has two dogs to keep her busy, both of whom she rescued from a shelter. When talking about her dogs, Brooke and Evy, Rhonda described how when she gets up at 4:30 a.m. to come to work, her beloved pets are right there with her, even at the early hour.

Despite having to be up so early to get to her job in the Egan dining hall, Rhonda said she wouldn’t have it any other way. Her great relationship with students makes the job well worth her while. When asked about her celebrity status on campus, Rhonda simply blushed and said the students are just “all so nice.”

One student went so far as to pay tribute to Rhonda by dressing up as her for Halloween last year, even borrowing her Parkhurst visor to complete the ensemble. Rhonda’s fandom doesn’t end with a Halloween costume, with students going so far as to get her Mother’s Day cards and creating a Facebook fan page.

The good will and positive aura Rhonda fosters is not only limited to the students either.

General Manager of Dining Services Kim Novak was compelled to weigh in on Rhonda’s impact on staff.

Novak said, “Everyone has a personal life, but Rhonda leaves hers at the door, and makes it all about the students.”

With this being Rhonda’s fourth year with Parkhurst, it doesn’t look like she will be leaving anytime soon.