Many people would jump at the chance to get to travel and spend an extended period of time in another country.

Juniors Catherine Costa, Clair Riley, and Hunter McCabe are among some of the students who took the opportunity to spend eight weeks studying and seeing the sights in Ireland through Mercyhurst University’s travel abroad program.

Contributed photo: Students enjoy the tour of the Guinness factory in Dublin, Ireland.

Costa explained her reason for deciding to study abroad in Ireland was for the experience itself.

Costa said, “I am in Ireland, it doesn’t get much better than this.”

Other reasons why students chose to go on the trip included the relatively inexpensive price, compared to other school travel abroad programs and the difficulties of coordinating a
study abroad program that gelled well with Mercyhurst’s current trimester schedule.

“The classes are challenging because it is hard to find a balance between doing homework and wanting to go explore Ireland and Europe and see the different cultures,” Costa said.

But there comes a time to set aside the books and have a little fun. All three students mentioned their trip to Dublin, where they were allowed to explore on their own, as one of their current favorite experiences in Ireland.

They also met and had drinks with the mayor of Ireland, and shopped on Grafton Street, a famous shopping district in Dublin.

Riley, in particular, fondly remembers visiting Cork City, similar to Dublin but much less crowded. There she climbed to the top of Blarney Castle to kiss the famous Blarney Stone.

McCabe explained the friendly nature of the people around Dungarvan as a definite plus during his stay in Ireland. He also enjoyed biking to high points in the Irish countryside.

McCabe said, “You can see for miles and miles, taking in all the beautiful scenery around you.”

But McCabe said his least favorite experience is the exchange rate between the American dollar and the European Euro, which is currently 1.3 dollars to every 1 euro.

“It may not seem too bad,” said McCabe, “but it really adds up.” 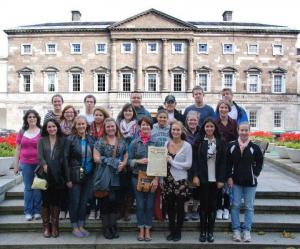 Contributed photo: Students pose for photo outside of the Irish Parliament during an educational trip.

Nevertheless, Costa, McCabe and Riley all recommend their experience during their trip abroad to other prospective students interested in visiting another country.

“Who knows what other time in our lives we will be able to do this,” said Riley, “After college, we’re broke so we need jobs and from there it becomes difficult to make time to travel. Doing it while we are young, I think, is also important.”

Though eventually the students will have to say goodbye to Ireland and return home, these experiences will stay with them for a lifetime.