The ACHA Hockey show on LakerTV is on air for its fifth consecutive year. 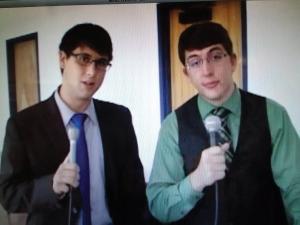 The show began with alumnus John Baranowski when he was a sophomore at Mercyhurst and is now run by senior biology major Seth Pezar.

Last year, Pezar began working with the ACHA team and its media. This year he is officially the team media producer.

LakerTV adviser and Communication department lecturer Brian Sheridan sees the steady continuation of this show as a “demonstration of student initiative.”

The communication department provides the necessary equipment and airtime to Pezar to produce the show.

“(The hockey show) is a great example of students’ passion for a subject,” said Sheridan. “If you want to do a special show, we give you the tools and resources to do it.”

Pezar sees the show as something he does for fun.

“Hockey forced me to take a break from school work,” he said.

Pezar is involved in many aspects of the show including production, editing and commentary.

In the future, Pezar hopes to include player interviews, coach interviews and weekly reviews.

Sheridan wants students to know that using LakerTV is not something that is limited to communication students.

“This is a campus resource that is not specific to a major,” said Sheridan. “Students get exposure to (television production) in high school and can continue that here.”

The hockey show airs on LakerTV, channel 19, Tuesday and Thursday at 10 a.m., Wednesday and Friday at 11 p.m. and Saturday and Sunday at 7 p.m.