“The Age of Dinosaurs” exhibit is the largest display ever to set up in Erie and features a never before seen adolescent Tyrannosaurus rex skull.

The exhibit is on display from Saturday, Oct. 13, to Tuesday, Feb. 21, at the Tom Ridge Environmental Center (TREC), located by Presque Isle State Park right across the street from Waldemeer Park. It will be open from 10 a.m. to 6 p.m. everyday including weekends and admission is free to the public.

The exhibit contains a variety of specimens from the era of the dinosaurs and is curated by Mercyhurst University Instructor of Geology Scott McKenzie.
Most of the pieces are on loan from Michael and Barbara Sincak who maintain a business known as “Treasures of the Earth.” 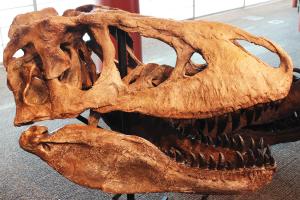 According to McKenzie, a friend of his found fossilized vomit 20 years ago.

These types of fossils assist in detailing what dinosaurs ate in ancient times and are important in piecing together the ancient past of the time of the dinosaurs.
The Plesiosaur is a marine reptile that resides at about 15 feet tall.

“(The Plesiosaur) is massive and the way they have it placed on the stand makes it feel as if it is coming out at you,” said freshman and exhibit help Emily Esteban-Baughman.

“There is no place else that someone could see all of these specimens together at the same time,” said Archaeology and Anthropology Lab Supervisor Jeffery Illingworth. “Many of these have actually never been exhibited to the public anywhere on the planet.”

McKenzie in particular wishes to promote the idea that the dinosaurs did not totally go extinct, but instead became birds.

The draw of the exhibit, according to Illingworth, is two-fold.

First, the enjoyment factor of seeing cool dinosaurs and other specimens is a major factor. Second, the exhibit sets itself up for teaching and research.
Esteban-Baughman thinks the exhibit is perfect to take Boy and Girl Scouts to visit.

McKenzie is very excited about the unveiling of the exhibit, working with extinct animals in general and teaching anyone who will listen about dinosaurs and the history of the earth.
McKenzie said, “(The exhibit) is a dream come true.”