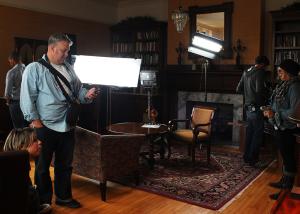 Walking through the halls of Old Main or Warde Hall last week, you may have unknowingly encountered a film crew.

This production company is a local company called About the Logo, Llc., and they are using Mercyhurst University as a part of the set.

Inspiration for the film comes from the author/director, Tom Fox-Davies’ trip to Erie.

Fox-Davies was an actor in About the Logo, Llc.’s first film, “Homecoming” and was then invited by the producers to visit Erie. As a native from England, he was inspired by this part of American history and wrote the film.

Under the working title “The Underground Railroad,” the film takes place in modern day America, on a college campus.

A girl named Sam applies for an internship in a prestigious law firm; however, another student named Tarquin applies for the same internship and when Tarquin finds that out, he starts using his father’s influence and money to “buy” his way into the law firm.

Sam issues a challenge to Tarquin by saying that she bets that she can make it to Canada using only ways of transportation that would have been available during times of the Underground Railroad, from 1840 on.

She and her friend Jake set off for the journey while Tarquin uses social media to create hype and even offers $15,000 to any person who catches Sam.

Larson said that he hopes for audiences to learn about the history of the Underground Railroad and of course to entertain.

“This is an ultra-low budget film; crews and actors are paid at a lower wage and are doing the film for the love of acting and the story,” Larson said.

“I never liked the philosophy of going into a town and taking it over for filming, but Erie has been very supportive as a community,” said co-producer Phillip Matarrese. “Mercyhurst is beautiful and had the look fit the role of a fictional Ivy League campus.”

“The Underground Railroad” is one of several films completed by About The Logo.

Two of their films, “Best Friends Forever” and “Up Country,” are on the festival circuit. The company’s first film, “Homecoming,” is scheduled for distribution in the near future.

In recent years, About the Logo films have taken “Best Picture” and “Best Actress” awards at film festivals.