Associate Professor of intelligence studies Kristan Wheaton, J.D., has acted as a pioneer in game-based learning, especially in regard to Intelligence Studies.

Wheaton’s advocacy of gaming skills has put the Institute of Intelligence Studies at Mercyhurst University on the pages of USA Today, featured him (Wheaton) as a subject-matter expert in notable academic publications, and allowed Mercyhurst to be ranked in the nation’s “10 best colleges for game-based learning” by bestcollegesonline.com.

This has hit a chord with students. 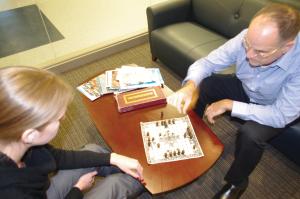 “I personally like games in the classroom, especially during review sessions. It helps refresh the material in my mind and reinforce so that I remember it better. Games are also much more interactive than the typical lecture, and often times are hands on, which is what I really like,” freshman Chuck Robinson said.

In his Strategic Intelligence class, Wheaton “likes to incorporate well-known games, such as ‘Clue’ and ‘World of Warcraft,’ because they take strategy and make you think.”

He also uses “Defiant Russia,” a board game based on the 1941 German attack on the Soviet Union, and the online musical puzzle, “Auditorium.”

Wheaton emphasized that he is not the first professor to use game-based learning.

“Some professors might not use it to the extent that I do, but I’m sure there are others on campus using games of some sort,” he said.

He offers the game-based learning as a part of a voluntary game lab students are welcome to participate in.

“The lab has become pretty popular,” said Wheaton. “The fewest we’ve had is four; the most, 20. I’d say we average around 10 to 15 students weekly.”

Although his research is incomplete, Wheaton said the introduction of games appears to have strengthened his students’ critical thinking skills, expanded their ways of thinking about intelligence problems and helped them to discover better solutions to problems.

If the end-game is to elevate the quality of students’ work and produce better and more confident analysts, Wheaton figures he’s on the winning track.

Wheaton has presented his academic approach to gaming at the Global Intelligence Forum in Dungarvan, Ireland, the Game Education Summit at the University of Southern California and most recently, a presentation on “The Five Myths of Game-based Learning” at the American Association of University Professors annual conference in Washington, D.C.

Wheaton is also the author of a popular blog among intelligence professionals, Sources & Methods at .