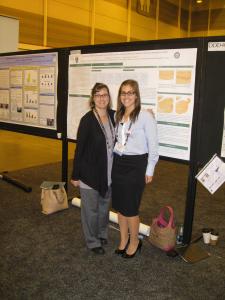 The SfN hosted an annual meeting providing the world’s largest forum for neuroscientists to debut research and network with colleagues through lectures, symposia, workshops and various events.

The event was held at the Ernest N. Morial Convention Center; 28,500 people attended. This event is the largest international conference, and Mercyhurst presented two posters on research they had been conducting for two years prior to the conference.

McCoy is a psychology major with a neuroscience concentration and a biology minor at Mercyhurst, and Ashley Russell who graduated this past year, is now attending the University of Buffalo for a master’s degree in Behavioral Neuroscience.

The posters that Mercyhurst presented were located in the general poster session, so they were among hundreds of others. McCoy and Russell each worked with Melchitzky for almost two years before they presented their findings.

“It was very overwhelming at first because there were 28,500 people in attendance, so it was the largest conference I have been to but I definitely enjoyed it,” McCoy said.
The conference offered lectures, and symposia all relative to the field of neuroscience. There were some poster sessions and talks that had to do with specific themes or subtopics of neuroscience, so attendees could decide to attend which-ever they preferred.

“I learned a lot while I was there. I was able to talk with graduate schools as well as learn about the newest research going on in the field on neuroscience. It opened up my eyes to how expansive the field of neuroscience really is and made me realize that all of the opportunities that exist in this field,” McCoy said.

The next conference will be held in 2013 in San Diego, and hope fully Mercyhurst will be represented next year.