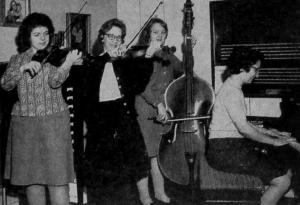 Most Catholic high schools and grade schools have a school uniform that is mandatory for each person to wear everyday, but to think of a college having a dress code is pretty bizarre.

Not too long ago, in the 1960s, our very own Mercyhurst implemented a dress code for the students. At the time it was an all girls school.

The 1961 Mercyhurst Student Handbook gave some examples of what the girls had to wear to class on a regular basis like, “sport dresses, suit skirts, and blouses; sweaters and blazers make the proper attire for class.”

Imagine being handed this book on your first day of class as a freshman. Today these standards are obviously not held high and we do not have a dress code.

Styles have changed a lot since the early 1960s and the existence of a dress code restricted people from allowing them to have their own personal sense of style.

Students in 1961 were permitted to wear styles such as “slacks, and Bermuda shorts, and kilts may be worn at picnics and hayrides or by decorating committees and stage-craft crews in carrying out their work.”

This section is referring to casual dress for everyone in 2012 currently on campus.

Ladies would have to wear a skirt everyday to class, and I know for some people that would not go over very well today, especially to 8 a.m. classes during winter term.

“Sneakers may not be worn on Sunday, unless they are worn for a picnic or for tennis,” stated the 1961 handbook.

This restriction of shoes would cause much controversy on today’s campus, because everyone wears sneakers, whether or not they are athletes.

Today, having a list of rules of what we could wear would make some girls want to rebel against the rules.

The rest of the rule book hadfeatures on what girls were allowed to wear in the dorms and even off campus.

The styles would obviously not be relevant in today’s society, but if there were a list of restrictions on dress for today’s campus, like the strict rules of the 1961 Mercyhurst Student Handbook, students would go crazy.