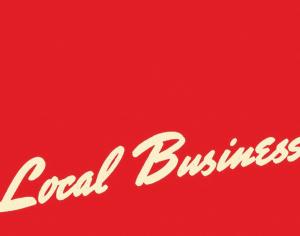 It seems that often I pick the albums I want to review in the same way a five-year-old may pick out cereal. Truly it is all about what is on the box. Now most of the time this leads to me choosing albums that I absolutely hate, but on rare occasions I find something wonderful.

This happened to me recently when I found an album cover that simply said, “Local Business” against a red background. The name of the band wasn’t even on it. Feeling curious, I looked up the album not knowing what to expect and to say the least “Local Business,” the third album for the band Titus Andronicus, did not disappoint me.

Named after a Shakespearean tragedy, Titus Andronicus is an Indie-Punk band that hails from Glen Rock, N.J. Unlike previous albums by this band, who offered 15 minute epics about the Civil War, this album is very much on the punk side.

Honestly, the first thing that I picked up on this band was how much they sounded like the 70’s Glam Rock band The New York Dolls. Both bands have gruff vocals thrown over twangy, overdriven guitars, and huge gang vocal choruses that hit you like Hurricane Sandy making land fall.

The track that really got my attention right from the first listen was, “In a Big City.”

This song starts out with this twang-filled electric folk guitar, and is soon followed by the lead singer’s confessions of life in a big city. “Moved over to the other side of the river, now I’m a drop in a deluge of hipsters,” says a little about his experiences of living in the big city.

“My Eating Disorder” is worlds apart from “In a Big City.” It is a heartfelt way of explaining one of the band member’s struggles, and is structured more like a big rock epic which lasts a little over eight minutes.

This track hosts a wide variety of tempo changes and even has this hair metal, dual lead guitar part.

I found both of these to be a surprise as well as proof of this band’s versatility. The last track worth checking out is “Ecce Homo,” which has a lighthearted guitar line compared to most of the other tracks and a simple rhythm beat. The pure simplicity of the song is what really stands out compared to the other tracks.

This album is definitely worth listening to, though it will be hard to like the whole album, due to the lack of spark in some of the other songs. This should not be seen as a deterrent to this band or their other works. So go ahead invest some of your time in “Local Business.”