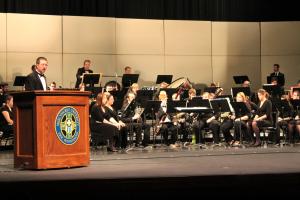 Selina Bowe photo: Mercyhurst Department of Music professor, Dr. Scott Meier, stands at the podium in front of the Wind Ensemble. Meier eagerly describes the next piece they will perform.

Last Saturday the Mercyhurst Wind Ensemble had their first concert of this academic year and the group certainly stayed true to the theme of freedom.

Conducted by Mercyhurst Professor Dr. Scott Meier the pieces performed were patriotic and the group seemed to capture a sense of pride and nationalism with every beat.

“I was struck by the number of ways in which we refer to freedom. Would we need to so thoroughly define our freedoms if we had never experienced their loss?

In response to this question, the assumption follows that there are an enormous number of people who have or are experiencing the loss of freedom in one sense of another,” Meier said. The program started off with “Fanfare for Freedom” by Graham Lloyd and “Out of the Darkness, Into the Light” by Philip Sparke, a classic American composer. Both of these pieces seemed as if they came straight out of an action movie.

They featured strong, melodic lines with syncopated accents and left the listener with a sense of pride and eagerness to hear more. Right in the middle of the concert was a composition called “A New Birth of Freedom,” which was written by Randol A. Bass. This piece was used as background music for an inspirational reading of the Gettysburg Address.

The speech was given by the D’Angelo Department of Music’s own Admissions Coordinator and Administrative Assistant Krista Lamb. The speech had such charisma and passion that it left some audience members in awe, some with more American pride than ever before and some with tears streaming down their faces. Lamb captured the American spirit with her words with such a formidable ensemble playing the patriotic music in the background.

The later half of the concert consisted of two equally patriotic pieces. The first being “A Movement for Rosa,” by Mark Camphouse, a powerful selection which features rhythms reminiscent of chants and slogans of the civil rights movement.

The last piece that was presented is probably one of the most recognizable American themes, John Philip Sousa’s “The Liberty Bell March.” The entire concert was one worth praise and recognition. The arts are certainly alive and well at Mercyhurst.