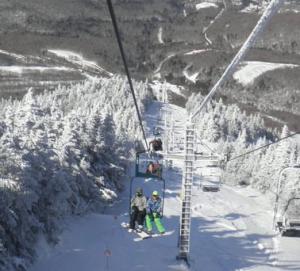 When the winter storms come to Erie, students find ways to have fun in the snow.

You may think that skiers and snowboarders are rivals because you watched “Johnny Tsunami” too much as a child; but that is not the case.

McScrew President Phil Theriault said, “All students are welcome…it depends on what night is best for you.”

There are snowboarders on ski club and skiers on McScrew. Besides the different sports represented by each club, there is another difference. Teachers and faculty run Ski Club; while McScrew is primarily student run.

“Ironically, I am not a winter sports buff. I’ve been skiing once and it didn’t work out very well. Each club is required to have an administrator as their adviser and the club has a great group of students that make it easy to work with,” McScrew adviser Christian Beyer said.

Still, don’t let the involvement of teachers in the club scare you away.

“It was a family thing,” Theriault said.

Theriault doesn’t favorite the Peak though, he enjoys going to Holiday Valley for the club.

Theriault isn’t the only winter sports buff on campus; Ski Club President Barbara Burriss began skiing when she was young as well.

“I had little plastic skis when I was two or three,” said Burriss. “I like just being able to get out in the snow.”

Burriss likes going to Peak N’ Peak because it has something for everyone.

“You can stick to easy slopes or try harder ones,” Burriss said.

Both clubs take time out from skiing and snowboarding and go tubing once a year. You could even join the club and tube the whole time if you wanted to.

Many students take advantage of these clubs during the winter season.

Junior Collin George said, “Snowboarding club is a good way to meet new people who are interested in the same hobby as you.”

Ski Club and McScrew go weekly to the slopes, starting after Christmas break. Both clubs have transportation, so students don’t need to drive themselves.