'Tis the Season,' a holiday treat 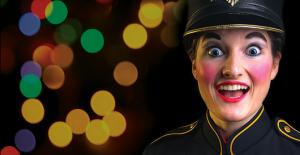 pac.mercyhurst.edu photo: The Mercyhurst Dancers and the Liturgical Dance Ensemble present Tis the Season, a festive holiday concert for the whole family.

The holiday season now seems to be synonymous with holiday performances of music and dance. This year at Mercyhurst is no different as the dance department prepares for this weekend’s performance of “Tis the Season.”

Featured in the concert is a new creation of “Babes in Toyland,” choreographed by the dance department’s newest faculty, Melissa Bobick. The scene is set to an adaptation of the original score, Toyland is depicted vividly as two children are drawn into the mythical place on Christmas Eve.

This section features Elaina Sutula and Kelsey Sawyer as the two girls who find themselves in Toyland. While in Toyland, the two girls meet, play and dance with a gaggle of life-like toys that take the forms of ballerina dolls, hobbyhorses and marionettes.

When asked about her choreographic work, Bobick said, “When looking for a story to choreograph, I came across Babes in Toyland and, after some research, discovered it was originally an operetta by Victor Herbert premiered in 1903. I was lucky enough to find an instrumental adaption of the score that works quite nicely for dance. Throughout the piece’s history there have been many versions of the Babes in Toyland story, and most of them are extremely complicated.

Taking inspiration from each of these different versions, I created an original holiday-themed story that works well for ballet.” Also featured in this incredible holiday performance, the Mercyhurst Dances will perform “Santa’s Toy Shop,” which includes seasonal magic such as Santa’s reindeer, frolicking elves, and tap-dancing soldiers all topped off by jolly old Saint Nick himself.

The Liturgical Dance Ensemble, directed by C. Noelle Partusch, choreographed to J.S. Bach’s “Christmas Oratorio,” will perform “A Multitude of Angels.” The event will be topped off by musical performances in the lobby before the concert and a special treat from Saint Nick for each child.