The Mercyhurst women’s hockey got off to a great start of the 2012-13 season, winning nine games in a row until a tough face-off with Robert Morris.

The Lakers are making their presence known off and on the ice.

With a record of 14-3-1, a 7-1 winning streak on their home games and fourth ranked, the Lakers are a team to look out for this season.

Senior goal tender Stephanie Ciampa has been rising to the challenge this season so far, and was named College Hockey America Goaltender of the Month on Tuesday, December 4. This is Ciampa’s second straight goaltender of the month award.

Starting in a total of 10 games so far, allowing for only 11 goals, with 185 saves, Ciampa is at the top of her division as goalie.

“That award has a lot to do with the way the team plays as a whole. We had a good stretch of games last month playing together really well and when the people in front of me do their job it makes it a lot easier for me to do mine,” Ciampa said.

With a save percentage of .944, Ciampa is at the top of her game this year.

“We got off to a good start this season much like we did last year. We have a lot of big games coming up after the holidays, so hopefully we can play well to start off the New Year,” Ciampa said. 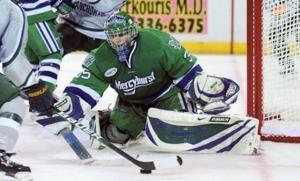 Ryan Zapolski gets ready to block a shot by a University of Anchorage oppenent back when he was a Laker.: Sydney Cuscino photo
“A lot of the freshmen have stepped into big roles for us so far this year. By this time, everyone seems to be comfortable with what is expected of them so we can focus on putting it all together and working to accomplish our goals,” Ciampa said.

After a two straight losses against Robert Morris this past weekend, the Lakers are looking to regain their momentum to have another unforgettable season.

“Our weekend with Robert Morris was a tough series,” said Ciampa. “It is always a good game when we play them, and they are a team that we have to beat in order to accomplish our goals.”

“There are a couple games we would like to have back, but we have also done some really great things so far this season. At the same time, we know that we need to focus on the second half of our season,” Ciampa said.

The Lakers’ next game is Thursday, Jan. 3, against the Buffalo Bisons. The Lakers take on the Bisons at the TullioIce Center at 7 p.m.