‘Tis the Season’ puts audiences in the holiday spirit 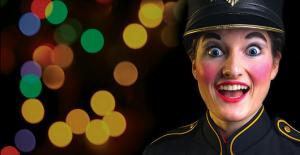 Mercyhurst Ballet Theatre came to the stage with toy guns blazing for last weekend’s performance of “Tis the Season,” a holiday treat for the whole family.

The mood was set both festively and eloquently as freshman music major Khylinn Hayes played festive tunes on his violin. The Dance Departments’ newest faculty, Melissa Bobick, choreographed the first piece that was a re-envisioned rendition of the classic “Babes in Toyland.”

Telling the story of two sisters who leave their parents for a trip to the mystical Toyland, freshman Elaina Sutula and sophomore Kelsey Sawyer played their roles of the two sisters perfectly.

Every movement and bit of choreography really gave the audience the feeling that they were two young girls receiving presents from their parents. The girls get transported to a magical place of marionettes, hobbyhorses and a beautiful ballerina doll, which junior Emily McAveney portrayed in the story. McAveney’s performance was especially captivating; her technique was spot on and there wasn’t a single moment when a smile left her face.

After spending some time with the toys in their mystical land, the girls decide that although toys and dolls are fun, there isn’t anything quite like spending time with family on Christmas.

The scene was incredibly captivating; every person on stage brought an individual energy with them that created an ambiance that was certainly greater than the sum of its parts. The second piece took a religious turn with “A Multitude of Angels,” with visually stunning choreography by Associate Professor of Dance C. Noelle Partusch.

Featuring a peaceful blue backdrop and flowing, beautiful costumes for the dancers, this section was set to J.S. Bach’s “Christmas Oratorio,” which gave it the appropriate mood, and still tied it into the holiday season. The effect created by this piece was moving and gave the audience a sense of warmth. The dancers moved together, which created an effect of unity that added to the piece.

The third and final set of scenes took the audience through a joyful thrill ride and gave an inside look on the organized chaos of toys and frantic elves that is the North Pole two weeks before Christmas Day.

Choreographed by Associate Professor of Dance, Mark Santillano, “Santa’s Toy Shop” included seven separate scenes and a menagerie of recognizable tunes such as “My Favorite Things,” March of the Toy Soldiers,” and a fun twist on a popular Christmas Tune, “Rudolf the Red Nosed Reindeer Mambo.” The whole show popped with pizzazz and energy, providing true entertainment for an audience member of any age. Associate Professor of Dance Mark Santillano provided narration in verse between acts.

Not only did this provide the time necessary to change the elaborate scenery, but also gave the audience comedic relief with fun and witty rhymes. Mercyhurst Ballet Theatre certainly deserves recognition for the constant stream of brilliant performances they provide.

The atmosphere of the event was astounding. “Tis the Season” is just what was needed to make this holiday season feel truly complete.