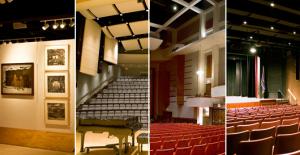 pac.mercyhurst.edu photo: Johnson heads the new theatre program here on campus. Not only is there a new and very active Theatre Appreciation Club, but a brand new Theatre Minor being presented in the Fall.

Mercyhurst has had a relatively strong artistic presence and now certainly isn’t any different. On the contrary, if there was any time to get into the arts on campus, it is right now. In addition to the thriving music, dance and art departments, a new discipline is joining the ranks.

Starting with a rapidly expanding Theatre Appreciation Club and recently approved minor, the theatre program is beginning to take off here at Mercyhurst. The new theatre minor will be in effect starting in the fall of the 2013-2014 academic year, headed by Assistant Professor of English and Director of the Mercyhurst Theatre Program Brett Johnson, Ph.D.

“It’s an exciting time for Theatre at Mercyhurst, with the revitalization of the Theatre Appreciation Club, the approval of the Theatre minor and the introduction of a regular production season,” Johnson said.

A remarkable number of students have come forth with an interest in the club,” he said.

“I’ve been encouraged and energized by the initial response to these programs. The club currently has 49 members, led by an outstanding executive committee, which has organized a number of events to foster a sense of community among students interested in theater and to raise awareness about the burgeoning program,” Johnson said.

Students from all walks of life and personal interests have shown an incredible dedication and level of commitment toward making this a fantastic year of commencement for the theatre program.

“Additionally, students from all disciplines have expressed interest in auditioning for the productions and adopting a minor, and my colleagues have welcomed opportunities for collaboration. There’s a definite need for theater at Mercyhurst, and I look forward to building the program in the upcoming years,” Johnson said.

The minor allows students to gain more than sufficient knowledge of various types of theater including performance, design or dramatic literature.

The new theatre program’s first production will be “Eurydice,” a retelling of the Orpheus myth told through the eyes of the heroine. The show dates are Friday, April 12, and Saturday, April 13, at 8 p.m. and Sunday, April 14, at 2 p.m. in Taylor Little Theatre.