Hard work and dedication are two characteristics one must embrace when entering the armed services.

For three Mercyhurst students, their triumphant efforts are being acknowledged for placing within the top 25 percentile of the national Army ROTC ranking system for their performance during the summer session of the 2012 Leadership and Development Assessment Course (LDAC).

Seniors and intelligence studies majors Lindsey Bostwick, Matt Terrigno and Adam King earned the LDAC honor from their excellent performances during a 28-day summer assessment course in Fort Lewis, Washington. Those in the ROTC program complete the evaluation after their third year of education and are tested on their skills involving education, leadership and physical capability. 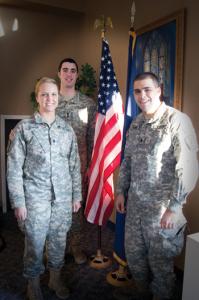 Mercyhurst photo: Seniors Lindsey Bostwick, Adam King and Matt Terrigno placed in the 25 percentile of their session of the 2012 Leadership and Development Assessment Course (LDAC).

The ROTC program is not for everyone and each cadet usually has his or her own reason for getting involved in the program. For Bostwick, her grandfather was a huge influence on her decision to join.

“I got involved in ROTC mainly because my grandfather was in the Army and he was always a role model/father figure for me growing up,” said Bostwick. “I knew the Army would be a good career path for me being an Intelligence Studies major and also an opportunity for me to set myself above my peers.”

Others know right away that the ROTC path was for them, like Terrigno.

“There were times during my childhood in which I wanted to join the Army in order to serve a country that promises its citizens many rights,” Terrigno said.

His hopes of becoming a part of the military were then sealed when he received a scholarship in the spring of 2009.

Roughly 5,500 cadets completed this assessment this past summer. Bostwick is very proud to be one of the top cadets.

“I feel extremely accomplished and proud that my hard work and commitment paid off. I know I can speak for my peers when I say the extra effort is definitely worth it in this career,” Bostwick said.

For Terrigno the program isn’t about winning awards, but rather having respect and a bond between him and the rest of the cadets.

“Personally, awards mean little to me. I’m not suggesting that I’m too good for an award,” said Terrigno. “Rather, awards are a physical representation on your chest to suggest what type of soldier you are. It is my belief that an individual truly wins an award when he can have his men believe in his actions and his role as a leader.”

The award is based on GPA, physical training test scores, extracurricular activities and LDAC performance.

Placing in the 25 percentile gives these three cadets top choices of branch in the Army, including military intelligence, field artillery and aviation, respectively.

This is only the beginning of their careers, for the future of these cadets will still be focused along the ROTC lines.

“When I commission as an Officer I will go to Ft. Huachuca, Arizona, for my Basic Officer Leader Course (BOLC) in Military Intelligence, which is my basic branch,” said Bostwick.

“After that I am not sure where I will be stationed but I have a four-year active duty commitment.”

Terrigno has plans of his own.

“Currently, I am planning on moving to Fort Rucker, Alabama in order to become an Aviation Officer in the greatest fighting force on the planet. I plan to attend Grad School by 30 and hopefully retire after 20 years in the Army,” Terrigno said.

Other cadets who participated in the LDAC assessment from Mercyhurst are seniors Alyssa Ciehanoski, Dillon Lynch and Cameron Kunkel.