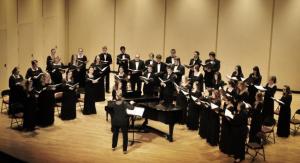 Contributed photo: A select chamber group for the Mercyhurst Concert Choir have been selected as guests of the Polish government to give a stunning concert at a national Polish festival.

Director of the Sullivan Conservatory and Director of Choirs Rebecca Ryan encourages her students to travel abroad and creates opportunities for international travel.

In the past, she has taken students to places such as Spain, Ireland, Honduras and most recently, Italy.

During last year’s trip to Italy, the concert choir had the honor of singing during a Mass in the Vatican as well as participating in the Chianti Festival and a concert in Monte Carlo.

This year, her concert choir has received a very unique and special invitation that could not be overlooked. The Polish government has invited the Mercyhurst University concert choir to Poland as special guests to sing this coming May.

A total of 21 people will be flying to perform. This includes 13 students, three Mercyhurst graduates and five adults consisting of parents and invited guests. Before departing, however, the Poland group will participate in the adult and baccalaureate graduation ceremonies for Mercyhurst.

Along with many other choirs from around the world, they will be singing in the 1st Lublin Festival of University Choirs from Lublin Sister Cities. Over the course of three days, the choirs will work on music selected for the festival by the administration in Poland.

The music has not been disclosed yet, but the choirs will give an immense concert at the Lublin Cathedral on the third day.

“I am very excited to be going to Poland,” said junior voice performance major Kathleen Reveille. “It is a place I never thought I would go to in my lifetime. I’m looking forward to learning about the history, culture and one-fourth of my heritage. And, of course, sing and share a great experience with friends.”

Throughout the eight-day trip, the Mercyhurst choir will also be giving several concerts and singing for Mass at various churches in Lublin.

The choir will be giving outdoor performances at places such as City Hall, the Old Town and the Maria Curie Sklodowska square in front of the University of Maria Curie Sklodowska. Ryan has volunteered to arrange a solo concert featuring her students by having them perform duets, solos or in small groups pieces.

After the Polish festival is over, they will travel to Krakow where they will shop, sight-see and visit the famous Wieliczka Salt Mine.

They will also travel to Warsaw to see the Polish Uprising Museum, which opened to memorialize the 60th Anniversary of the Warsaw Uprising of 1944 during World War II. All of the students selected to attend are ecstatic to travel to Poland.

“I am very excited to visit the underground salt mine in Krakow. Being able to sing in many different churches around the world is such a great opportunity,” said Marisa Jacobson, a junior music education major who also went to Italy with the group last year.

Compared to past trips, this one will have a more vigorous singing schedule and itinerary for the students, but they are very excited and honored to have been invited to partake in such a special event in Lublin.